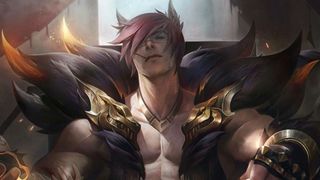 League of Legends' Sett, and Season 10, is nearly upon us. As well as a whole host of changes to Summoner’s Rift ushered in over the course of preseason, the new ranked season heralds the arrival of a new champion: Sett.

While many of the champions from LoL’s in-game nation of Ionia are denizens of peace, harmony, and a decent helping of elemental magic, Sett is a little different. The Boss is the leader of an Ionian crime syndicate whose greatest strengths are his physical prowess and damage threshold.

When is Sett coming out?

Sett was due to make his way onto the Rift with League of Legends patch 10.1. However, following a delay to him and the prestige version of the Mecha Kingdoms Garen skin, the League of Legends Sett release date is January 15.

As a tank, Sett doesn’t have the same level of complexity as some of League of Legends’ more technical fighters, but his abilities do introduce a few new mechanics into the game:

Sett is a quintessential League of Legends juggernaut. When it comes to damage, he can dish it out just as well as he can take it, but he’s not particularly fast. The speed boost from Knuckle Down offers The Boss’ only real mobility, but it's really only helpful when it comes to starting fights: you need to be moving towards an enemy to activate it. Even when compared to the other members of his largely-immobile subclass, Sett struggles to close the gap on more slippery opponents. And you can forget trying to use him to cut and run.

What The Boss lacks in speed, he redeems in strength and perseverance. The lower Sett’s HP, the greater threat he is. Heart of the Half-Beast means the more health you’re missing, the more you’ll gain back in regeneration. Thanks to Haymaker, the more damage you take, the more you deal when you activate the ability—and the bigger the shield you’ll gain.

In lane, running away from a bad trade probably won’t work, but Sett can take a beating before shielding himself from the killing blow and responding with a powerful punch. Unlike most champions, he also benefits from fighting inside minion waves: Facebreaker works on all enemy units, allowing Sett to wade into the fray and use opposing creeps to activate his stun. Once you’ve started a fight, pay close attention to your passive: right-punch hits much harder than left punch, but using Knuckle Down at the right time ensures your damage output stays as high as possible by resetting your basic attacks.

When it comes to teamfights, Sett’s ultimate changes the types of champion you'd normally target. In many fights, players are looking to lock down ADCs or Mages who have the potential to deal lots of damage, but have relatively low HP. By contrast, The Show Stopper deals more damage based on the bonus health of Sett’s primary target, meaning its most effective when Sett grabs a tank and launches it into the enemy backline. It sounds risky, but the CC offered by Facebreaker and the shielding provided by Haymaker should be enough to help Sett survive until the rest of his team can provide backup.

For itemisation, opt for choices that keep Sett alive long enough to deal as much damage as possible. When the need to leap into the fray arises, Gargoyle Stoneplate or Sterak’s Gage are sensible choices: they’ll stop The Boss from getting burst down as soon as he lands. Trinity Force and Titanic Hydra also seem decent picks, as they benefit both health and damage. If you’re struggling to pick yourself up after your ultimate, Guardian Angel could round out your build, but only as a late-game addition to help in major teamfights.