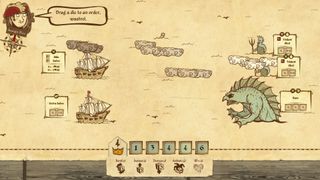 Here Be Dragons is a whimsical looking game, part tribute to weird drawings on map edges and part dice battling puzzler, that’s due to release in just a few days. In it, you follow the journey of a bunch of oddball ne’er-do-wells as they attempt to murder every monster in the ocean, or something like that. It’s not clear exactly what the plot of Here Be Dragons is, probably because all the characters are incurably bonkers, but at least the game and I agree on one thing: Christopher Columbus was a jerk. Anyways, it’s a turn-based battle game where you use dice to activate your fleet of ships and use their powers to win combats against monsters, pirates, and sometimes even the legitimate authorities. Perhaps most uniquely, the game is narrated by the crazed crew, so you can gather up ink to change the story as it’s written by rewriting battle outcomes and dice rolls.

I’ve played a bit of the release build and it’s a rather tough game—some of the harder encounters were more like puzzles than tactical combat. It stretched my ability to quickly grasp and utilize the mechanics, which is a good thing, to me. I rather enjoyed the tactical conundrum of whether to murder the whales or the fishmen first. This is likely one for fans of recent games like Dicey Dungeons or One Deck Dungeon, though it’s much more of a focused, story-driven experience than those more roguelike games. Here Be Dragons will release January 30th on Steam for $14.99. Here’s a trailer: