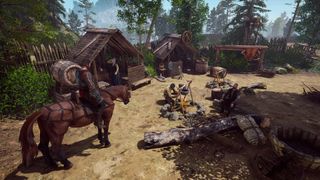 King's Bounty is a series with a long history and significant influence over the tactical RPG genre. It was, after all, the gameplay inspiration behind Heroes of Might and Magic. Despite that, the series has come and gone many times over the 30 years since its debut, and it's never received a full, numbered sequel.

That finally changed at last year's Gamecom, as 1C Company announced it was developing King's Bounty 2, and now we've received our first in-depth look at the game in the form of a developer diary.

The first diary focuses on how King's Bounty 2 will differ from its predecessors. The biggest difference is the game will be leaning more heavily on its RPG aspects, with a third-person camera, branching quests, dialogue options, and a morality system that determines how NPCs and companions treat you. In fact, 1C claims that only about 30% of the game is in combat, with the rest of the time being spent exploring the world, finding loot, solving puzzles and talking to NPCs.

Another big change is in how combat plays out. While the core top-down tactical play of King's Bounty is still here, units can now move in three dimensions instead of just two. The example given is that archers can take the high ground and close off areas to melee units unless there is a flying unit that can avoid their arrows and attack them directly.

Unit composition will also be different, putting a hard limit on specific types of units to stop you just rolling through the entire game with a handful of faithful companions. It's claimed every unit will become obsolete by a certain point, requiring you to constantly swap out your army as you progress.

Honestly, the diary sometimes falls a little too heavily into PR-talk by implying things as ubiquitous as quests and exploration are core of the King's Bounty series and not just staples of the RPG genre as a whole. It also really oversells the idea of a third-person camera, as the in-development animation quality… isn't great.

King's Bounty 2 has no fixed release date, other than some time in 2020.