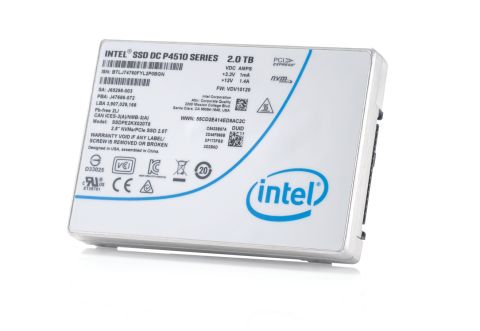 Almost certainly there are more cost-effective options. But this does make for a worthwhile reminder of the potential of the U.2 interface.

Another month, another new SSD from Intel. Over the last year or two, we've seen Intel roll out new SSDs built into conventional PCI Express cards and SATA enclosures, released in new formats such as M.2, supporting the latest NVMe control protocol in various guises, and even ditching tried and tested NAND flash memory in favor of the radical new 3D XPoint tech. That's just on the consumer side. Intel's SSDs for servers are even more varied. And yet there's still more.

The "more" in this case is the new Intel SSD DC P4510 Series. It's available in configurations up to a monster 8TB, but this example rocks in at 2TB. Still a beefy drive by solid-state standards. Indeed, the smallest of the P4510 Series is a full 1TB.

In many regards, the P4510 looks fairly familiar. The basic form factor is 2.5 inches, and there's 3D TLC flash memory under the hood. But look elsewhere, and novelties abound. Strictly speaking, it's aimed at enterprise applications, such as cloud servers, but it's still an intriguing device for mere desktop mortals. It hooks up via the lesser-seen U.2 interface, which once seemed like it was set to replace SATA, what with its combination of PCIe-powered pace and a SATA-like simple cable interface, but that never happened.

Actually, the basic character of U.2 is worth recapping. Formerly known as SFF-8639, U.2 supports four gen3 PCIe lanes and the NVMe protocol, and thus matches the more familiar M.2. Indeed, adapter cards transforming M.2 slots into U.2 ports are available. The difference is U.2's cabled interface, with the drive end of the cable looking a lot like a SAS drive connection, and the motherboard end resembling a double-stacked SATA port.

Beyond the U.2 shizzle, the P4510's specifics go something like this: The NAND memory is Intel's 512GB 64-layer 3D TLC stuff, and the NVMe support extends to version 1.2. Within Intel's hierarchy of enterprise drives, the P4510 falls into the more value-oriented segment, with lower endurance and write speeds than some of its other offerings. It's still very fast in most regards, however. This 2TB version is rated at 3,200MB/s for reads and 2,000MB/s for writes. Read IOPS weigh in at a hefty 624K, while the write IOPS are a mere 81.5K.

For the target market, it's the endurance rating that may be most relevant. Intel rates it at 0.7 drive writes per day (DWPD). Intel's more expensive NAND drives are rated at around 3DWPD, while the fancy 3D Xpoint-powered Optane P4800X is good for 30DWPD. That's still a healthy 1.4TB of data writes every day, for five years, so no worries about killing the drive in desktop use. For the record, this is a 15mm U.2 drive, and thus around twice the thickness of a 2.5-inch SATA drive.

If that's all the speeds and feeds covered off, how does the P4510 actually perform? Assessing it fully from a server or cloud perspective is beyond our remit, but as a client drive, the numbers are pretty zippy. ATTO reveals peak sequential performance very much in line with Intel's claims, although the peak read speed in the CrystalDisk benchmark is disappointing. Random access looks strong, if rather lopsided. But it's the internal file copy that marks the P4510 as something a little bit special: 32 seconds is about half the time taken by a typical consumer M.2 drive, and thus seriously rapid.

Of course, this 2TB SSD is hardly the most cost-effective way of specifying a desktop rig. Almost certainly there are better options. But it does make for a worthwhile reminder of the potential of the U.2 interface, and if the P4510's particular combination of characteristics and capabilities match what would have to be a rather niche set of requirements on the desktop, it might still just make sense. Even at over $1,200.

This article was originally published in Maximum PC's June issue. For more quality articles about all things PC hardware, you can subscribe to Maximum PC now.

Almost certainly there are more cost-effective options. But this does make for a worthwhile reminder of the potential of the U.2 interface.