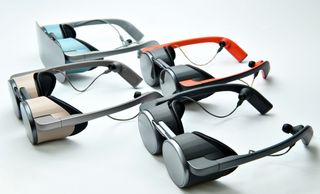 Price isn't the only barrier to entry for many of the VR headsets currently on the market. Some might not find them comfortable, or the screens make them sick. (I fall into the latter category.) But on top of that, the design of VR headsets hasn't changed much over the last several years. They're still big, bulky bricks that strap to your face, and it takes some some will power or a great game to forget that your head feels unbalanced.

Panasonic unveiled reference models of a new VR headset design at CES, one that's smaller, more form-fitting, and as The Verge pointed out, looks like steampunk fashion glasses. Instead of oversized ski goggles, we have something that looks right at home in a James P. Blaylock novel. There are two eye holes instead of one big visor, and the cushioning looks similar to that of swimming goggles. Ear buds are located near the end of each arm, but detach so the user can fit them into their ears properly.

Before we go on, note that these reference models won't necessarily become consumer products—Panasonic says it will "continue to further develop the new VR glasses so that they can be used in a variety of applications" with a focus on things like "VR sports viewing" and "virtual travel experiences" over 5G mobile connections.

Panasonic's VR headset is also the first to feature micro OLED panels, which it claims does away with the 'screen-door effect' caused by looking at screens up close, and is the first to support HDR, which according to The Verge's demo was impressive.

But this prototype has drawbacks. The reduced screen size creates a boxy image, and it seems to be more front-heavy than current VR headsets. Two cables protruding from the front of the eyepieces attach to a gaming PC as well, which pull the headset down on the user's face, according to The Verge, and that sounds more annoying that pulling a strap around your head.

The Verge also tried a non-functioning prototype that replaced those cables with a single USB-C cable running from one of the glasses' arms, which seems like a much better design if you want to wear this headset for longer than ten minutes.

Panasonic has the right idea for a more mainstream design, but unless it fixes the awkward cable placement, it might struggle to catch on. These are just prototypes, though, and suggest we could see some interesting VR developments over the next five years or so.