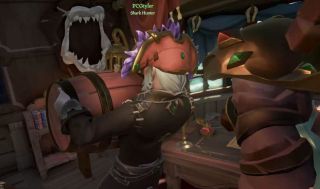 There are a lot of pirate rules that I didn't know when I first started playing Sea of Thieves. The rules of pirating, as written by captains Tyler Wilde and Christopher Livingston, are not always practical, but they are almost always funny. For example: Treasure must always be hidden in the crow's nest, obviously the safest and most realistic place for a bunch of giant chests. You're not supposed to read your own map, but instead hold it out in front of you for a fellow pirate. And if the ship is in danger of sinking, someone should always stand on the deck playing music.

None of the pirate rules forbid mock sword fighting, enraging megalodon when you have a ship full of treasure, or eating rancid shark meat and puking on one another (I'd say that last one's encouraged). And you know, I'm starting to think the pirate rules have a few blind spots.

That's my excuse for accidentally sinking my galleon, killing my entire crew, and losing about 30,000 gold in treasure this week—inadequate pirating bureaucracy. No one told me that swinging my sword around could cause our entire ship to explode.

So here's what happened, fellow pirates, and let this be a lesson in safe pirating. While on a quest for treasure, I stumbled upon the rare gunpowder barrel not in the clutches of a suicidal skeleton. We stuck that highly explosive barrel in a rowboat and took it to our galleon, because you never know when you're gonna need to sneak onboard someone else's ship and sink it.

Later, while fighting a giant shark, Tyler jumped overboard holding the barrel, trying to suicide bomb the megalodon when it opened its mouth to take a bite out of our ship. He died before he could detonate it, and being a brave and responsible pirate, Chris jumped into the water to retrieve the gunpowder barrel, quickly stashing it in the captain's quarters before returning to the fight. Seriously, you never know when you're gonna need one.

With loads of treasure from our victory over the megalodon secured, we started heading towards a trading post to sell all our loot. I'd like to point out, at this point, that Tyler broke the first pirate rule by putting some of our treasure in the captain's cabin. Amateur hour.

Swinging your sword around at your fellow pirates is normally harmless. There's no friendly stabbing. I was excited, both about our loot and about the new golden sword I earned from completing a Tall Tale adventure, so I took some stabs at Tyler. He ignored me (as it turned out, he couldn't hear my sword sound effects, so he had no idea I was stabbing him in the back).

There was only one possible thing he could do, in that situation, that would hurt us in any way. We were cruising with good wind, just a couple minutes away from an outpost where we'd cash in our plunder. Tyler decided, with all that treasure (again, improperly) stowed in the captain's cabin, he should move the gunpowder barrel somewhere else.

He picked it up, and I stabbed him with all the nonchalance of a cat stepping on a nuclear launch button. I fucked up.

Tyler: Obliterated. Me: Obliterated. Chris, a deck above us steering the ship: Very dead. Andy, somewhere else on the ship politely minding his own pirate business: Also, instantly, dead.

Here's the moment of disaster, again, from Tyler's perspective. Turn on the sound to hear our reaction to this utterly absurd moment.

There are many dangers on the Sea of Thieves, but it turns out, in my case, the greatest danger is a restless sword finger. Don't be like me. Don't stab your friends in the back, especially when they're anywhere near gunpowder barrels. On my ship, that's a new pirate rule.