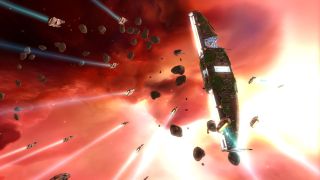 Gearbox Publishing revealed at PAX West last year that Blackbird Interactive, the developer of the 2016 RTS Homeworld: Deserts of Kharak—and founded by veterans of original Homeworld studio Relic Entertainment—was working on a new, back-into-space Homeworld game. A very successful Fig campaign followed, and a little over a month ago the studio laid out its plans for the game.

But that's apparently not the only thing Blackbird is working on. Publisher Focus Home Interactive announced on its forums today that it is also working with the studio on an entirely new project. It said nothing about what that project might be, allowing only that it's "an original IP," but it did hint that some sort of space-based shenanigans will be involved, saying that it will combine "Focus Home’s love of innovative, new experiences with Blackbird’s deep knowledge and enjoyment of sci-fi settings."

"From our first meeting it was clear they are a perfect fit to help deliver BBI's innovative new game to a wide audience. Focus genuinely shares our vision to create high-quality original titles and have completely embraced the new world we are crafting," Blackbird Interactive founder and CEO Rob Cunningham said. "We feel extremely fortunate and grateful for this opportunity, and look forward to an exciting and productive partnership."

It's hype, yes, but also legitimately interesting. I didn't have much hope for Deserts of Kharak when it was announced—who wants to play Homeworld on the ground?—but Blackbird wove an intriguing prequel story into the existing fiction to create "a setting and story that is at once distinct from the earlier games, yet also enriched and informed by them." The net result, we said in our 90/100 review, is "a terrific RTS that sets itself apart from the rest of the genre's recent games [and] an excellent Homeworld game that reinvents the series while also recapturing its magic."

The announcement suggests that Blackbird's new thing will have no impact on the development of Homeworld 3, but I've reached out to inquire just in case. It will be revealed at PAX East, which runs March 27-February 1, and is expected to be out later this year.

Update: In a statement, Gearbox confirmed that Homeworld 3 will not be impacted by the new project.

"Gearbox Publishing isn't involved with their new project but like the rest of the community, we're super excited to see what Blackbird Interactive has in store!" a rep said. "Blackbird Interactive is a multi-game studio and this doesn't affect their progress on Homeworld 3."