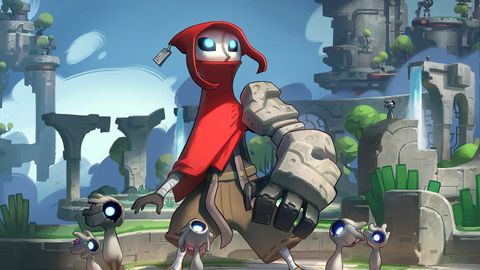 A gorgeous world eager to be explored with satisfying puzzles and fun, if occasionally clumsy, action.

The oversized left arm of Hob’s silent protagonist is mechanical, gifted to them by a friendly robot early in the game. This magnificent appendage has multiple uses, from charged punches that make enemies explode and walls crumble, to activating arcane machinery and changing the layout of levels.

You also have a sword, letting you cut foes down in a stylish flurry, but it’s that great metal fist and its myriad upgrades that really stands out. When you charge and unleash it, whether the target is living or inanimate, you can almost feel its immense, crushing power rippling through your controller—which, incidentally, I strongly recommend you play with.

Hob is a mysterious little game, telling a wordless, enigmatic story that you have to piece together yourself. It’s not as abstractly cryptic as Hyper Light Drifter, which does something similar, but you still have to work to make sense of it.

It does this so well, in fact, that when I found an upgrade bench to unlock new abilities, I was disappointed to see them described with text. I would have liked to see developer Runic rely entirely on suggestion and icons, but that’s a minor complaint. Upgrades include a shield to deflect attacks, faster dodge-rolling, and longer, more powerful sword combos—all of which you’ll need when it’s time to battle the game’s oddball bestiary.

The fast-paced, streamlined combat is simple, fun, and disarmingly challenging at times. Some enemies, including a towering, spindly creature swinging an enormous club that I encountered early on, can catch you off guard by wiping your health bar out in one brutal hit.

Other enemies, all of which are imaginatively designed, have interesting patterns to learn and exploit, and are usually accompanied by low-level minions who helpfully spew out health-restoring red globs when killed. But, honestly, fighting is the least interesting thing you’ll do in Hob. It’s in the environmental puzzles, which thankfully make up the majority of the game, where it shines.

Hob’s world is gorgeous, with crisp, colourful art and the sense that you’re exploring the ruins of some ancient, fallen civilisation. The remains of dormant machines can be seen all around you, overgrown and crumbling, some of which you’ll use your robo-arm to reawaken.

Puzzles involve navigating maze-like dungeons, locating batteries to power up dead machines, pushing blocks, and making use of weird technology. And a solution will often cause a level to dramatically change shape, opening up areas that were previously inaccessible. Watching these vast, intricate devices groan to life and transform the world around you is an impressive sight.

Hob’s camera is mostly fixed in a top-down perspective, but occasionally it’ll dip behind your character and give you a tantalising glimpse of the world stretching into the distance. It teases you with far-off locations you won’t visit till much later, giving the game a remarkable feeling of scale.

Below the vibrant, interconnected overworld you’ll find cavernous dungeons full of puzzles and upgrades for your arm, including one that lets you use pads to teleport around the level. It’s a place that yearns to be explored, and there are secrets—usually in the form of skill-unlocking XP orbs or costumes with unique properties—that make doing so worth it.

The weak link in Hob is, unfortunately, the platforming. The rigid, fixed perspective can make it difficult to gauge the distance between platforms at times, and the jumping feels a little too floaty and imprecise. Most of the deaths I suffered were not at the hands of club-wielding baddies, but falling down bottomless pits or being zapped by electrified floors.

Respawn points are, mercifully, pretty generous, but dying because you weren’t exactly sure where a jump was going to land never stops being frustrating. Luckily the platforming bits are never that complex or punishing, otherwise I might have lost the will to get through them.

Hob is an invitation to a world full of secrets, mysteries, and puzzles to be solved, and in that sense it’s fantastic. The combat offers a reasonable challenge and improves as you upgrade your hero, but isn’t nearly as compelling as simply exploring its open world.

A gorgeous world eager to be explored with satisfying puzzles and fun, if occasionally clumsy, action.