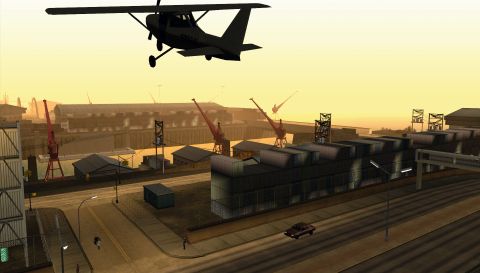 Minor graphical scars left from its painful transformation into a PC game do nothing to dull San Andreas inner beauty. The best of the series, and already a contender for game of the year.

We're enjoying the height of summer now, but as temperatures plummet and skies darken, Rockstar promise respite from Autumnal misery: GTA 5 on PC. With improved framerates. And increased resolution. And cats! It took no time at all for resident GTA enthusiast, Andy Kelly, to go all CSI on its launch trailer (hammerhead sharks: confirmed).

In light of that, I've decided to delve almost a decade into the past and unearth PC Gamer's San Andreas review. At 94%, it's our highest-rated Grand Theft Auto ever, beating out Vice City by a whole 1%. Why? How? Well, as our reviewer Ross Atherton puts it, the game is, "at once a giant, living playground and a smoothly contoured story. San Andreas still manages to be coherent despite giving the player the opportunity to ditch and pick up the storyline at will."

Pouring over these admittedly rough screens, I'm reminded of a time when a sprawling playing space meant necessary compromise. It was accepted back then—look at Morrowind and True Crime. Open world? You'll have a blast, sure, but expect glitches and graphical issues. Since San Andreas the bar's been raised. Even in a game as mind-bogglingly massive as GTA V, we don't expect so much as a stretched texture. And, thanks to Euphoria, we're treated to some of the most convincing physics of any videogame, open world or otherwise.

Nine years on, San Andreas doesn't have great graphics. It doesn't have great physics. It doesn't even have cats. What it does have, though, is a sublime silly streak. It's a bouncing playground filled with sights and delights, whether that's bombing through Red Country on a jet-pack, crop dusting with Guns 'N Roses on the radio, or pumping iron at the local gym. With a staggering amount to see and do, wrapped in in Rockstar's trademark cultural satire, we strongly recommended it then and we strongly recommend it now.

Welcome to GTA as it was always meant to be.

Forget the fact that GTA San Andreas started life as a PlayStation 2 game. The ugly caterpillar has become a beautiful (if foul-mouthed) butterfly. The fifth in a series that since its 2D birth on PC (back in 1997) has celebrated despicable gangsters and drive-by/-thru/-into and -over crime. San Andreas reaches new lows of depraved morality, senseless violence and alpha-male aggression. But it's the fact that it's one of the best games ever made that has already propelled it to console ultra-success.

GTA 3 struggled to make the technical leap to PC with its code intact, but months of finger-crossing and animal sacrifices to nameless gods have paid off. San Andreas runs like a dream, with the excellent mouse and keyboard control system of Vice City, extended visual range and atmospheric effects.

Like its two more recent predecessors, San Andreas puts you in the shoes of a central character about to embark on a life of crime. However, CJ – aka Carl Johnson – is no career mobster in the mould of Vice City's Tommy Vercetti. In fact, he's been away from the 'hood for five years to try and escape the gang violence endemic in his home city of Los Santos. He's brought back by his mother's untimely death. Hooking up with his brother Sweet and old friends, CJ is inevitably drawn back into the world he had left behind; a world of guns, drugs, territory, casual violence and 'respect'.

Respect is actually a measured factor which is raised by performing notorious criminal acts. High respect means you can reinforce CJ with extra gang members when attempting to take over enemy territory. Although, initially, CJ doesn't even get respect from his brother. It's a good system, which draws you further into the game. As you complete missions, you start to gain the grudging respect of those around you. Eventually they adore you. San Andreas is no conventional RPG, but there's a definite feeling of character progression in this game.

Or is it an RPG? CJ has several other stats which have subtle but noticeable effects on the game. Driving, cycling, stamina, motorcycling, flying, pistol, rifle... every mode of transport and every type of weapon has an associated skill which increases as you employ it.

Better gun skills mean more accuracy with that weapon, while a higher motorbike skill means you won't fall off as easily if you nick a car or lamp-post. There are even scales for fat, muscle and sex appeal, variously dictated by what and how much you eat; your work in the gym; what you wear; your haircut and your tattoos. Some of this is frippery, but it'll also affect whether you can attract girlfriends (and their subsequent side missions), how much damage you withstand (fatties can take more lead, apparently) and some people's responses to you. Like so much in San Andreas, these statistics are carefully woven into the game's structure.

If you thought that Vice City's twin islands offered a huge playground, prepare your mind for a boggling. San Andreas offers a whole new world of largeness. There are three cities: Los Santos, a version of Los Angeles and your home town; San Fierro, standing in for San Francisco; and Las Venturas, a dusty, neon-bright Las Vegas squatting in the desert. Not only is each vast in its own right, but the intervening space is expansive and packed. After the first ten hours or so, you're 'encouraged' out of Los Santos and introduced to a world of hicks, country music, tractors and remote, winding roads. The game's sense of place is so distinct that, as black CJ, you actually feel out of place in the small towns that dot the countryside.

As you get sucked further into the nefarious scheming of the corrupt cops excellently voiced by Samuel L Jackson and Chris Penn, you're dragged through the rolling countryside and north into San Fierro, all the time meeting and working for bizarre and intriguing characters. With a much more memorable layout than the first city, it's an even more exciting place to be, and you'll be rushing back and forth between the cities too, through the countryside. Eventually you'll progress to Las Venturas and then back to Los Santos to tie up the loose ends of the story.

Throughout the game, the variety of the 100-plus missions never fails to delight. Steal a combine harvester. Infiltrate a secret army base. Chase down thieves on quad bikes. Rob a bank. Shoot down remote-controlled planes with a minigun. Rescue a bunch of stoned English rockers from the desert. Fly a plane to Liberty City to carry out a hit. From the simple to the devilish, from the grimly criminal to the comedic, from the sublime to the ridiculous, San Andreas retains the power to surprise and entertain throughout its lengthy structure.

Not just in terms of the missions, either: you'll be infiltrating, burgling, flying, following, swimming, and shooting as a passenger as well as the more usual shooting and driving. My only quibble is that CJ never questions the reasoning behind the hundreds of casualties he's asked to inflict. “Kill that man? Aiight,” sums up his usual response, and at times it's hard to empathise with such a cold-blooded hero.

As in the previous two GTA games, you can invest your cash in properties, some of which will provide an income once you've established a business there, and others which just act as new save points. These special locations often require you to complete a series of missions, offering yet another avenue to pursue. At any given time you'll have between one and half a dozen mission paths on offer, for you to take up in any order you want, or ignore completely in favour of a spot of pimping, exploring, police-baiting, male grooming or just riding around.

At once a giant, living playground and a smoothly contoured story, San Andreas still manages to be coherent despite giving the player the opportunity to ditch and pick up the storyline at will. The world doesn't have to depend on cutscenes for consistency, because there's always something going on, even if just in the background, to provide colour, life and atmosphere. The radio stations, legendary in GTA 3 and Vice City, are back with a dozen to choose from. As ever, Rockstar's cultural references are spot-on, and anyone older than their mid-20s will be powerfully reminded of their youth with the likes of Public Enemy, Primal Scream and Guns 'N' Roses. The interludes and chat shows are superbly scripted, if not quite as bizarrely hilarious as Vice City's. Again, the PC version enables us to supply MP3s and have them played on a dedicated radio channel.

San Andreas does the simple things well. Just stand on any given street, and within seconds you'll see little tableaux developing. Pedestrians bump into each other, pass comments at you and others, and get run over. If you're in an unfriendly 'hood, thugs wearing enemy gang colours will swagger up, offering threats, and eventually attack.

Just existing is more gripping than before. Your 'wanted' level is again represented by stars, but here just one star will have the cops shooting and crashing cars like their doughnuts depended on it. Wanted stars are harder to get rid of, and even civilians will react angrily if you nudge their cars. As a result, you can't afford to be too carefree while cruising the streets. This, combined in particular with Los Santos' gritty, often run-down atmosphere, makes the overall experience quite different to Vice City's cartoon world. 'Actions have consequences' seems to be the moral message.

That's not to say that San Andreas is humourless: quite the opposite. From the missions and cutscenes, to incidental dialogue and even tiny signs in obscure shops, you'll see Rockstar's trademark comedy style, ranging from the juvenile to the very explicit. San Andreas isn't afraid to say anything. Minor graphical scars left from its painful transformation into a PC game do nothing to dull San Andreas' inner beauty. The best of the series, and already a contender for game of the year.

Minor graphical scars left from its painful transformation into a PC game do nothing to dull San Andreas inner beauty. The best of the series, and already a contender for game of the year.