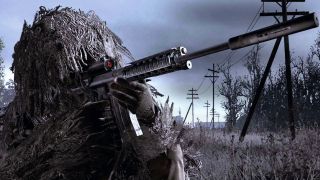 This article was originally published in PC Gamer issue 293. For more quality articles about all things PC gaming, you can subscribe now in the UK and the US.

We call them first-person shooters, but “first-person follower” would be just as apt. If there’s one thing every Call of Duty campaign has in common—other than military acronyms and cutscene pyrotechnics—it’s an AI personality who escorts you through the level, booting down doors and wrestling the odd guard to the floor. These characters can be more annoyance than accomplice, especially when they oblige you to digest some plot development before you can move on. At worst, they feel like personifications of Call of Duty’s legendary unwillingness to cede real agency to the player.

Is there a place alongside more obviously choice-driven, open-ended games such as Metal Gear Solid V for campaign design that merely asks you to keep up? Do we have anything left to learn from the likes of Modern Warfare’s Soap MacTavish? As regards the work of Mohammad Alavi, at least, the answer is yes. Now employed at Respawn Entertainment, a developer formed by Infinity Ward co-founders Vince Zampella and Jason West after their seismic bust-up with Activision in 2010, Alavi is the designer behind two of the most acclaimed missions in Call of Duty history: Modern Warfare’s sublimely paced and reactive All Ghillied Up, and Modern Warfare 2’s extraordinarily disturbing No Russian.

Alavi’s creations represent the Call of Duty campaign at its most thoughtful (though arguably No Russian is a different case), especially in terms of how they explore the role of an AI companion. I spoke to him about their construction, how Call of Duty and the FPS have changed since he first began work at Infinity Ward, and whether the traditional singleplayer campaign has a future in the age of Destiny.

Before Alavi became involved with Call of Duty he was all set to enter the medical profession. While at school he had produced mods for shooters such as Duke Nukem 3D, ranging from the basic—a level modelled on the Alavi family home—to larger-scale collaborations such as the original Natural Selection for Half-Life. But he had given little thought to game design as a vocation, until one of his mods was featured in an issue of PC Gamer.

The publicity inspired Alavi to apply for a course at Florida’s Full Sail University (he had, in fact, already been accepted by a medical school, but chose not to inform his parents of this). After graduating, he applied for a programming job at the up-and-coming Infinity Ward, which had just completed development of the very first Call of Duty. He wasn’t successful, but Infinity Ward’s management were impressed enough by Alavi’s mods to offer him a level design position on Call of Duty 2.

The so-called AAA games industry has changed enormously since Alavi made his debut. Team sizes have rocketed—the original Call of Duty was the work of fewer than 30 people, while 2015’s Call of Duty: Black Ops 3 was the work of around 400—and it’s no longer entirely feasible for an individual employee to operate across several disciplines. “When I started in 2004, I made textures, models, FX and sound FX,” Alavi recalls. “I did final art and lighting for levels. I wrote all kinds of systems as well as gameplay scripts. Plus, I designed and scripted levels. Fast-forward 12 years and I do one thing: I design and script cinematic gameplay. I’ve become a specialist in this particular area.

“I might be oversimplifying my role, but it’s hard to ignore how complex making games has become. The technology, the art, the design... it’s all advanced to such a degree, that I feel one can’t help but deep-dive into a particular area of game development in order to be successful.”

This is a regrettable transition in some ways, because Alavi’s finest creations stem from his willingness to forage beyond his official role—typically without the knowledge of his superiors. Step forward All Ghillied Up, Call of Duty’s first sustained attempt at ‘true’ stealth, and evidence that engaging choices are possible within a campaign that’s all about travelling from A to B.

It’s the calm that throws you. Even by the standards of subsequent games, Modern Warfare is dizzying—a coruscating carnival of tank raids and AC-130 bombardments, shellshock and broken glass. But it also has a playable flashback set in post-meltdown Chernobyl that opens amid overgrown fields and woodland, wind hissing through the stalks. “Too much radiation. We’ll have to go around,” remarks a voiceover the radio. Then, a clump of vegetation in the foreground stands up and reveals itself to be your ghillie-suited CO, Captain MacMillan. It’s a masterful introduction, setting the tone while almost casually illustrating the mechanics of staying hidden.

Born from study of Half-Life and the Metal Gear Solid games, All Ghillied Up marked the first time in Call of Duty that NPCs were capable of the behaviours we associate with stealth in series such as Splinter Cell. They react differently to the player depending on the distance and angle, rather than switching from passive to hostile the second you enter a certain viewing range. Lie prone in the grass and a guard might stroll right by, oblivious—a coding feat used to great dramatic effect when you and MacMillan have to crawl through a group of APCs and infantry. It’s one of the few moments in CoD when enemies actually inspire fear, rather than aggression. Soldiers loom against the sky, caterpillar treads thunder to either side and the slightest movement could be your doom.

None of this would have happened had Alavi not put his fledgling programming abilities to the test, writing a huge quantity of code in secrecy while designing the level. “The biggest challenge was that I’m not an AI programmer,” he says. “I’ve learned a lot about finite state machines and writing complex compartmentalised systems, but at the time I didn’t know what I was doing. Arguably, I still don’t.

“In a perfect world I would be an expert systems programmer as well as a designer. But my two options were to either describe my design goals to our AI programmer, who was swamped and wouldn’t have had the time to give me all my features, or to write it myself and deal with the consequences of inexperience. I chose the latter. Anyone who’s seen the code internally knows it’s garbage, but to the end user it did exactly what I wanted it to do, and I didn’t have to compromise on the feel of the gameplay.”

On the surface All Ghillied Up feels like just another corridor mission, and there are certainly elements that evoke CoD at its most restrictive—pockets of radiation to keep you from straying too far, a talkative companion whose death spells game over. But the level’s greatest trick is that it’s open to improvisation. The patrolling helicopter is primarily there for ambience, but if you keep your eyes peeled there’s a way of shooting it down. Rather than sneaking by infantry, you can pick them off with a scope, weave in among them with a silenced pistol, or go loud with automatic weapons lifted from the fallen. There’s a touch of Metal Gear Solid V to how much choice AGU crams into a limited span.