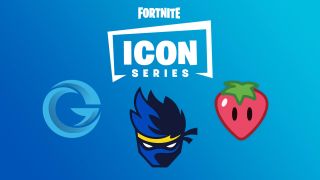 Epic announced the new Fortnite Icon Series on Wednesday, promising a collision between gaming, fashion, music and film. What does that mean for us normal Fortnite players? Well it seems like a whole new initiative from Epic to represent some of its biggest names in-game, so let's unpack the details.

What is the Fortnite Icon Series?

Like any big company initiative, it's a little nebulous what Epic means when it says the Icon Series will combine gaming, fashion, music, film and other entertainment in Fortnite.

What we do know is that Icon Series launched alongside a new Fortnite skin based on Ninja, the world-famous blue-haired streamer whose rise to stardom is due in large part to the game.

Ninja's Fortnite skin is available from the evening of January 16 to sometime on January 19, probably for some hard-earned V-Bucks. How many V-Bucks? Epic hasn't said yet, but I'd guess it'll be pricier than your average skin.

Anyway, Ninja's Fortnite skin came with four variant styles, plus a smattering of back bling, a pickaxe, and an emote.

Epic said in its blog post that the Icon Series will build off previous collaborations with the DJ Marshmello and Major Lazer. You'll remember that Marshmello hosted a short concert in Fortnite, played live, and Epic said 10 million people watched it. So it's entirely possible that these Icon Series collaborations won't just be a bunch of promotional skins, although they definitely seem to be starting out small with streamers.

Who is part of the Fortnite Icon Series?

So far, we've got a solid handful of confirmed Fortnite Icon Series collaborations. There's Ninja, of course, plus streamers/YouTubers like Loserfruit and TheGrefG.

Beyond that, we've also seen singer/dancer/actor Jordan Fisher (who also happened to play Matt in Until Dawn) get his own emote. The streamer known as Pokimane also got her own emote. You can see those in the sections below.

So far, all we've got is Ninja's skin and its four variants. Here's an image from data miner @HypeX.

There's no other skins yet, but you know, Epic just launched this whole thing, so we're glad to wait. We'll update this section when they do something new.

First up is this dance emote, dubbed "Fishin'," created by actor/singer/dancer Jordan Fisher.

Dropping into Emote Royale with my new emote! Enter the contest and you could get your own emote too. #EmoteRoyaleContest @FortniteGame @tiktok_us https://t.co/7ECMjAF5Ed pic.twitter.com/N6rgxcZfJBJanuary 18, 2020

Next up is this very, as the kids say, kawaii emote from the streamer Pokimane.

can't believe i'm saying this, but i officially have my own @fortnitegame Emote! 🤯🥳 it's available at 4PM PT tomorrow if you'd like to get it! #EpicPartnerP.S - you can also enter to have your own in-game emote by submitting a dance via @tiktok_us with #EmoteRoyalecontest 😁 pic.twitter.com/HItsUD3B7xJanuary 18, 2020

Want to know how to get Ninja's Fortnite Icon Series skin? You can also check out our Fortnite hub page for all the guides and news we write.  Here's everything we know about Fortnite Chapter 2 season 2, and here's the best Fortnite creative codes we can find.