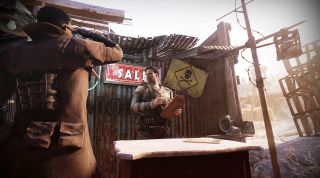 Bethesda has revealed some more information about the new reputation system headed to Fallout 76 when the Wastelanders expansion arrives (though we still don't know exactly when that will be). The reputation system, as outlined, doesn't feel particularly groundbreaking, but the idea of factions being introduced to Fallout 76 that aren't just robots and monsters you shoot on sight is, frankly, quite welcome at this point.

As you might guess, your reputation with the two main human factions, raiders and settlers, begins at rock-bottom. They don't know you, they don't trust you, and why would they? You're probably encased in power armor and carrying a small arsenal in your pants. But show them you're a good neighbor and you'll soon be able to change their opinion of you.

"The more you do to help a faction by offering information, taking down their enemies, and completing quests, the more you will prove you’re someone they can rely on and your reputation with that faction will increase," Bethesda says. "Eventually, you will rise through seven different reputation 'ranks', from Hostile or Cautious, to Neutral, Friendly, and Ally, among others."

We don't know how meaty these new quests and tasks will be, but the fact that there's seven distinct levels of reputation hints that it's not something you'll be able to breeze through in an afternoon, which feels promising. The size of the task will determine how much rep you gain, so completing a faction's story quests will reward you with beaucoup reputation boosts while a faction-based daily challenge might only give your rep a small nudge.

As you progress through these ranks, vendors for the factions will sell you "a wider range of goods," including plans for some faction-based items. (An 'I ❤️ Raiders' T-shirt, perhaps?) And, naturally, you can also anger these factions, lose reputation, and even wind up with one or both of them being openly hostile to you. Can things get so negative between you and a faction that nothing will repair the relationship and they'll be perma-hostile? We don't yet know.

Again, none of this sounds much different than other reputation systems we've seen in the past, but I'm feeling a bit more interested in Wastelanders as we learn more about it. Next week, Bethesda says, it'll drop a new Wastelanders trailer, and with it, hopefully, a release date.