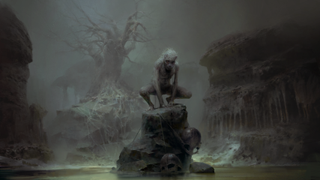 Project Wight is a new game from a team of veteran game developers calling themselves The Outsiders. It’s still very early in development, but the studio recently released some intriguing footage of the game in action, created in Unity, and as soon as I saw it I had to know more about it.

“There are currently 12 people working at The Outsiders,” says co-founder David Goldfarb, whose previous work includes the Battlefield: Bad Company series and Payday 2. “Our background is a pretty broad mixture of experience. Ben Cousins (co-founder) and I come from DICE, as do the other two founders. And we also have experience from Starbreeze, Sony, Guerrilla, and Avalanche. Lots of Swedish game dev in the house for sure.”

Wight is a low fantasy RPG set in the Dark Ages, and the twist is that you play as a creature that would usually be the enemy in another game. “The player will experience life on the other side of the sword as a creature attempting to survive the extermination of its species by humanity,” says Goldfarb. “The creature starts out young and extremely vulnerable, but will eventually grow strong enough to turn the tables on its persecutors.”

You can see this in action in the footage below. At first the young creature has to scurry away from danger, but later it returns fully grown and is able to holds its own in a fight. It’s an interesting premise for a game, to play as the ‘monster’, but I wonder if players will find it easy to relate to such an unusual protagonist. I ask Goldfarb what he thinks about this.

“It would be great if people did get emotionally attached to the creature, for sure,” he says. “Certainly the incredible feedback we had from the Unity teaser we released gives us hope they might! As far as people relating to them being potentially difficult, I don’t think so. There is a sort of universality of experience that lets us have empathy for animals, robots, and whatever else the imagination can come up with in fiction, film, and games.”

As for the Dark Ages setting, Goldfarb says it allows the developers to root the game in history, while still giving them some freedom to be creative. I ask him what makes this time period so interesting. “We know comparatively little about it, but enough to ground some of the more fantastic concepts of the game. I really think using history as a familiarity base helps make the fantasy stronger when you deviate from it, as opposed to creating a believable new world from whole cloth. That’s much harder.”

“The lower fantasy angle lends itself to a lot of mystery and what-if scenarios as well,” he adds. “What if there was a species of creatures that the Vendels exterminated in the course of their conquest? And what if you could be one of them? It gives us a lot of latitude to do interesting things.”

One of Wight’s biggest inspirations is a book by John Gardner called Grendel. “I read it a long time ago,” says Goldfarb. “It’s Beowulf, but written from the perspective of the villain. That inversion was interesting, but it also meant something. I was always siding with the outcast."

"There was some kind of dislocation in me it spoke to, I guess. That feeling of not understanding the world you were in, why you were there, or why things were cruel in it. And as time wore on it became clearer and clearer that there was a game there, and maybe the time had come to make it. So we did.”

Project Wight, which doesn’t even have a name yet, has a long way to go. But I’m already sold on the idea. As for what the moment-to-moment play will be like, Goldfarb stresses that team is still working hard to figure this out. “It’s too early to say, but we are definitely not making a linear experience. But how exactly that takes shape is still years away.”