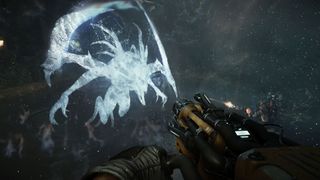 Evolve is a game about a team of hunters taking down 30-foot-tall mega-monsters, "team" being the operative word. But there may be times when you can't, or simply don't want to, bother yourself with the presence of other actual human beings, even for the noble goal of blowing monsters into gooey chunks. Which may lead you to wonder if Evolve can be played offline, all by your lonesome—and the answer to that question is yes, it most definitely can.

The ability to play solo "was always part of the plan," Chris Ashton of Turtle Rock Studios explained on the Evolve website. "Playing Evolve competitively, against other players online, can be a lot of pressure. We wanted to make sure anyone could play the whole game, including Evacuation, alone, with, or against the AI and it’s still fun."

In gameplay terms, the solo mode will be essentially the same as the multiplayer mode, with bots controlling the other hunters on the team. In that sense, it's similar to Turtle Rock's previous game, Left 4 Dead, but solo players will also be able to swap hunters on the fly, allowing them to control all aspects of the battle.

Having to actually disable your internet connection, as demonstrated in the very brief offline mode tutorial, is a bit clunky, but it's also coming out of the back of a console, which at least leaves open the possibility that the PC version will provide a more elegant solution. Either way, the important thing is that if you don't want to be online, you don't have to be online.

Turtle Rock recently revealed the third member of Evolve's monstrous triumvirate, the Wraith, which you can read more about here. Evolve comes out on February 10, 2015.