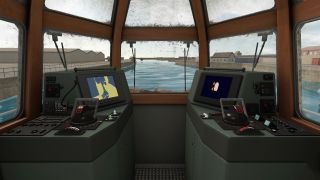 I see the appeal of Euro Truck Simulator 2, but for me, there's something far more exciting about the prospect of being out on the water, fiddling with levers and dials in some manner of ship. Some manner of ships feature in the (of course) prosaically named European Ship Simulator, which has just been given a release date of 20th February. Control a giant hulking ferry! Or a tiny fishing boat or speedboat! Or several other ships in between. Take on missions, battle the elements, or simply lark about pretending you're Robert Shaw in Jaws. I'll be doing the last one, obviously.

European Ship Simulator is already on Early Access, and I see a lot of positive reviews. I just love games where you can swivel around and admire the cockpit/bridge/dashboard etc, and as the above video reveals, Excalibur's latest sim should be pretty good for that. Here's a pretty promising feature list:

There doesn't appear to be any free-roaming, unfortunately, but then you can't have everything. You know, unless you're Rupert Murdoch or whoever, in which case you probably already own all the boats and all the islands you could ever sail them to. For the rest of us, European Ship Simulator should do nicely—as long as it's any cop, obviously.