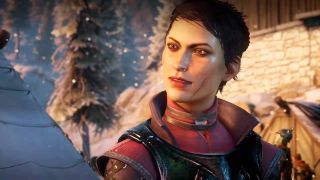 With Blights, civil wars and massive holes in the sky, there's not much time for Dragon Age characters to go on proper dates, but in the spirit of Valentine's Day, former BioWare writer David Gaider has shared his characters' dream dates, most of which are lovely and wholesome. Even Zevran's! Kinda.

Alistair's would probably start off as something which seems lame - like he takes you bowling. Then you realize he's rented the entire place, because he remembered your anniversary, and has it all set up with candles so he can clumsily serenade you while blushing the entire time. https://t.co/Y3ic7ypiX8February 14, 2019

Alistair remains my favourite Dragon Age buddy. He's a dumb goof, even if he becomes King, and very much an outlier among a roster filled with ambitious, cunning, magical folk. He's just some guy. His dream date is also very sweet, and there's nothing lame about bowling.

Zevran's dream date would involve him taking you on a tour of Antiva while he plays a mandolin. All the locals seem to know him and bring out cakes and other delightful treats. Eventually it turns out to be the lead-up to an assassination. After the fight, he apologizes with sex.February 14, 2019

It's a travesty that 'apologises with sex' wasn't one of Zevran's special abilities in Origins. I also have a feeling that murder is the natural conclusion of a mandolin performance.

Cassandra's date is taking you to a play of Varric's first novel. Her delight is palpable. You arranged to have her dragged on stage to play a character... at first she protests , but then plays the part perfectly. After, you walk along the pier while she talks about her dreams.February 14, 2019

Varric's terrible novels and Cassandra's obsession with them is one of my favourite parts of Inquisition, so a theatrical performance sounds like a perfect date. Also, every fantasy RPG should have a play-related quest—they're always great.

Check out Gaider's Twitter for the rest of them. A new Dragon Age is in the works, too, but so far we've only got a teaser from the Game Awards to go on.