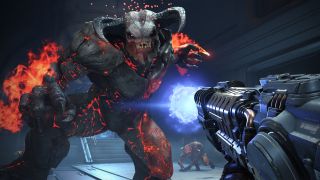 Buying a pricey game these days doesn't guarantee you'll get access to everything without dipping into your wallet again, but at least in the case of Doom Eternal you'll be able to save your pennies. Creative director Hugo Martin confirmed that there would be no shop or double-dipping when it comes to cosmetics.

Doom Eternal will let you unlock skins to spruce up the Doom Slayer, but you'll be able to get the lot just for XP. That's the only resource you can use to unlock cosmetics, which Martin emphasises will have no bearing on your Doom Slayer's skill at murder.

"Eternal is a $60 game," Martin said on Facebook, "not a free-to-play game or a mobile game—we are giving u [sic] a complete experience with no store just like you'd expect."

Its predecessor also eschewed microtransactions, though id did sell some multiplayer DLC. This was released for free after the first year, however, letting everyone play with the extra guns, maps and demons. Splitting the multiplayer community with DLC is always a bad idea, so hopefully nobody is going to be left out this time around.

Doom Eternal is due out on March 20.