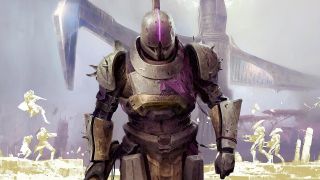 Shortly after the long-lost Destiny 2 guardian Saint-14 turned up in the tower, players noticed something very amusing: He'd take notice of anyone who approached him while wearing his helmet, a Titan exotic that was added in the Curse of Osiris expansion. He doesn't seem to mind sharing, though—in fact, he suggests using it to prank Zavala, the stoic, famously humorless command of the Vanguard.

It's a clever line and a cute interaction (although you can't actually go confuse Zavala, which is a shame), but it almost didn't come to be. As Destiny 2 technical dialog desinger Kareem Shuman explained on Twitter (via Polygon), narrative designer Nikko Stevens first came up with the line, after which it was recorded, imported, and processed. But because of required reworks, it was marked to be cut, which is where Shuman got involved.

This is epic - Saint 14 has a special voice line if you approach him wearing his helmet. From one Defender to another 😉 pic.twitter.com/cdAT8JSjoKDecember 20, 2019

"Quietly I decided to try extra hard to make it work, since I thought it was such a cool idea," he explained. "I was having lunch with my friends and I brought it up, asking if anyone could help. @btwoodrow [senior designer Brenton Woodrow] volunteered and knew exactly what I needed in order to make the new dialogue filter that checks 'Does the player currently have the Helm of Saint-14 equipped'. At this point all design work on Season 9 had to be tracked via bugs, so I wrote a bug for him, and he sent it back resolved in under an hour! What a hero!"

That wasn't the end of it, though. Further tuning was required to ensure the line popped when it was supposed to, rather than ending up buried under a pile of other random dialog.

"It was the last day of audio mix and we were all trying to put the final polish on things. My friend on audio test found me in the afternoon to say he'd approached Saint-14 with the helmet on and IT HAD WORKED," Shuman wrote.

So seeing reddit threads like this one, and finding other reactions to this specific line on day 1 of Saint-14 in the tower made all of us feel really great!https://t.co/a3zsRWUlPeDecember 21, 2019

To hear the line yourself, put on the Helm of Saint-14 and then go pay him a visit. You can find him hanging around in the hangar, behind an ornate rug hinting at the return of Trials.