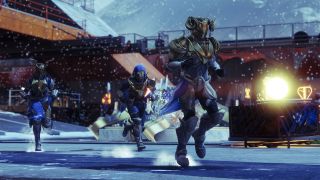 The holiday season has officially kicked off in Bungie's shared-world shooter MMO, and that means you have some Destiny 2 Dawning recipes to bake. Not only do you have some exclusive seasonal rewards to grind for, you can get baking without any of the mess or washing up. Lovely.

Speaking of rewards, you can earn the legendary Cold Front SMG by handing in your first gift to Zavala, and the new seasonal Sparrow, Alpine Dash. The latter requires you to craft Destiny 2 Fractal Rolls, a new Dawning 2019 recipe, along with Dark Chocolate Motes, plus bake 50 treats. Once you've unlocked the SMG, which is an aggressive frame archetype (ie the same as Huckleberry), you'll also be able to get random perk rolls on subsequent drops. We'll be hunting for the Feeding Frenzy/Kill Clip combo.

There's plenty more rewards on offer from cooking up a storm and handing the gifts out to the game's NPCs, including valuable enhancement prisms and cores. So get ready to bake yourself silly. Here's how to make all the recipes, old and new:

Below you'll find tall the Destiny 2 Dawning recipes and who should receive them. Each shows you the ingredients that must be cooked in Eva's Holiday Oven 2.0 to create the tasty treats, with some handy hints as to where you can get them all at the bottom of the page.

How to get Destiny 2 Dawning recipe ingredients

It's one thing knowing what items you need to get for your fantasy kitchen and tracking down each ingredient is quite another. Here's how to get all the ingredients mentioned above: