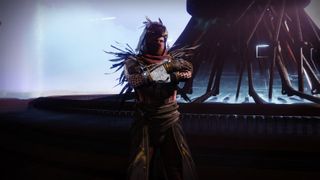 The Destiny 2 A Matter of Time quest must be finished before you can unlock the new seasonal artefact for Season of Dawn, The Lantern of Osiris. The mission isn't too taxing, but there are a couple of stumbling blocks some players may struggle with, so I'm here to point you in the right direction and give you the necessary hints to help you get stuck into the new season.

With the Destiny 2 roadmap in mind, there are plenty for players to be excited about in the coming months, including new Season of Dawn exotics, special abilities for seasonal mods, and a new PvE mode, Sundial. You'll be acquainting yourself with the latter to complete the Destiny 2 A Matter of Time quest, but first you need to meet with Ikora in the Tower's bazaar.

Where is Osiris in Destiny 2 Season of Dawn?

In your little tête-à-tête with the Warlock Vanguard, you're congratulated for your brave work in defeating the Undying Mind in the previous season. Vex activity on the Moon has returned to normal, but naturally, there's a further problem that requires your attention: The Red Legion.

The Cabal have been spotted on Mercury, so finding Osiris' location in Destiny 2 is your first A Matter of Time quest step. Find him by selecting the Disturbance on Mercury spot on your map of Mercury, then heading straight ahead past a few enemies.

How to get Sundial Components and find the Tangled Shore Obelisk

Defeating—or strolling right past—these enemies leads you to an impressively ornate structure, the Sundial, and you'll find Osiris at the base of it. He'll give you your next quest step: you now need to procure 50 Sundial Components by murdering Cabal in the Tangled Shore.

Get a solar weapon and sub-class equipped and then head to Sorik's Cut. Each defeated Cabal drops three Sundial Components, so you should be done with this in no time.

When you're done you need to bank them at the Tangled Shore Obelisk: it'll be right in front of you once you warp the southern fast travel point. From there you need to defeat enemies with abilities, Supers, and collect Orbs of Light. This'll take a little longer than your Sundial Components scavenger hunt, but when you're done, head back to the Obelisk and prepare yourself for the Sundial arena.

If you're struggling with this next stage, check out our Destiny 2 Sundial guide. But in short, it's a six-player PvE activity that's reminiscent of Menagerie: you and your team must score enough points in enemy waves to access a final boss.

From there, you can choose your Tangled Shore Obelisk reward. It'll always be a choice of the Steelfeather Repeater auto rifle or the Breachlight sidearm, but their perks are randomised. This isn't the end of your rewards, though: visit Osiris again to get yourself the shiny new seasonal artefact.