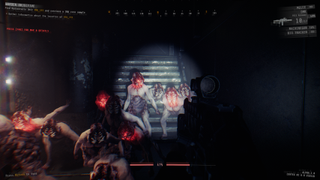 My teammates and I are dropped into complete darkness at the beginning of our GTFO mission. Blackness has swallowed us whole but I pause before I turn on my flashlight, past experiences have taught me that bright lights can disturb the fleshy, distorted creatures that roam these industrial wastes.

Apprehensively turning our flashlights on, we begin to look around and discuss our mission. We've been forced down here by a mysterious individual called the 'Warden' to find the main reactor and switch it back online. Our plan is to first access a terminal to see where the reactor is and then make our way there, sneaking through the sprawling, metallic maze. It seems straightforward enough but no doubt the devs, 10 Chambers Collective, will have thrown in some surprises that will put our teamwork to the test.

"There are a lot of games that do cooperation, but there's not much of an emphasis on playing together," 10 Chambers Collective's Svante Vinternatt tells me. "In other co-op games, you can do your own thing and it doesn't really matter if you communicate what you do and where you are. Those games are still fun, but we wanted to push that up a level and really demand that you communicate between teammates in GTFO."

Sneaking, being cautious, and keeping your team constantly informed about your surroundings is the best way to survive GTFO's devious missions. The fleshy ghouls waiting for you in the gloom will attack at the first sign of life, so being stealthy is the best technique. Sneaking up to the bloodthirsty lump with legs and taking them out with a charged-up melee attack is one useful move, and it's definitely better than unleashing a torrent of bullets that would alert the others.

You have weapons to help you survive but each player can also choose a specific tool in the load-out that will help you and your teammates complete the mission. The scanner tool will show you where enemies are lurking, and doors with alarms that attract waves of monsters are clearly signposted. You can also prepare for oncoming waves with a movable turret, multiple mines, and sticky foam that ghoulies can get stuck in. Working together, all of these tools can set the perfect trap.

"Instead of just a regular map, GTFO has more of a raid feel like in Destiny or World of Warcraft," Vinternatt says. "Even if you're not like an e-sport player with a perfect aim, you have a role to fill. If you're not experienced with this type of the game, having a tool that supports each other and helping place down tools and just communicating where enemies are coming from ... is vital for survival. You can't really have one person calling the shots because that person doesn't have all the information you need to survive."

In GTFO, there are a number of puzzles that you need to solve as a team. In one particular instance, one person needed to read out a code to another player who typed it into a terminal. Thankfully, many of the missions are divided into chambers, allowing you to have a well-deserved breather and figure out your team's next move.

You can also draw on a shared map so your team can plan where to go and what to do next. GTFO wants you to plan for the future, but when things go wrong super you need to improvise.

Your team's tightly choreographed plan doesn't always work out, but though bursts of intense action are commonplace, the game has the perfect balance of creeping tension and action that make for a great sci-fi horror game.

"The Alien movies are a big inspiration for us," Vinternatt says. "It's a special kind of horror. We're not going for the yucky or kind of big jump scares, although there are some of those elements, but it's not the focus."

This inspiration can be seen in the game's environments. Particles glide through the thick air making you feel like you're in the belly of a metallic beast. There might be a bridge you have to cross where the other end is completely in darkness or a perfectly placed fog cloud that reveals a shadow pulsating in the distance.

GTFO's levels are intricately crafted for a certain experience and 10 Chambers Collective want to continue this when making other levels in the future. "What we do is like a Dungeon Master in Dungeons and Dragons, we're adjusting for the community," Vinternatt says. "We want to give the community something new, something that they're not prepared for. We put a lot of time making tools to create levels and handcraft them to be able to make those experiences."

The devs have plenty more ideas for missions, and plan to keep releasing new challenges and cycling out the old levels. GTFO is out now on Steam Early Access and a full build is due after a year. It certainly doesn't feel like an Early Access game to me. Its balance of stealth, action, and horror make for a fun and frantic co-op shooter.