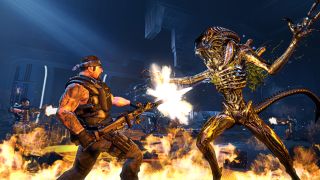 Cliff Bleszinski is best known as the creator of the Gears of War series, but his long and fruitful career at Epic also earned him credits on games including Jazz Jackrabbit, Unreal, and Bulletstorm. He had less success with LawBreakers at his Boss Key Productions studio, despite it being a pretty good game.

In an alternate universe, presumably one in which LawBreakers is a hit and Boss Key a viable and vibrant FPS studio, he also would have worked on a shooter based on the Alien universe. Bleszinski revealed on Twitter today that prior to Boss Key's closure, it was in talks with Fox to do a new Alien game, but the deal fell through when Disney bought Fox. (That deal wasn't actually completed until 2019, but negotiations dated back to 2017.)

Bleszinski said that the player would take on the role of Newt, the "mostly come at night" girl from Aliens, who's now fully grown. Ripley would appear as a "Cortana/Anya" figure, while the obligatory android role would be filled by a new one named Casey, Newt's doll (specifically, the head of Newt's doll) from the film.

Funfact: Before BKP shut down we were in talks to do a new game in the Aliens franchise with Fox.Then Disney bought them and that got lost in the shuffle, darnit.February 10, 2020

It's possible that this project could have been envisioned as one of the post-Alien: Isolation games Fox said in was working on in January 2019. The talks clearly didn't get too far along, but Bleszinski said that he was "drawing heavily from the Dark Horse comics" for the game.

Blesinski swore off making videogames forever following the closure of Boss Key, but more recently he signalled that he might have overestimated just how long "forever" really is. As well as reminiscing on Twitter, he's also currently working on a memoir.