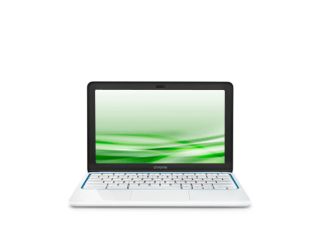 ARM and Haswell do battle

You knew x86 Haswell would eventually face off against ARM, but you probably didn’t expect the fight to go down in Google’s thin-client-esque Chrome OS. Yet that’s what we have as we pit HP’s new COS-based lappy against Acer’s second-gen Chromebook. Obviously, at Maximum PC we’re acutely aware of the Chrome OS’s limitations, but that doesn’t stop us from telling you which is the top Chromebook today.

Besides the original CR-48 and Google’s Pixel, Chromebooks haven’t exactly been known for their style. In fact, many people could confuse them with escapees from Netbook Island.

HP’s Chromebook 11 takes the prize for the most stylish Chromebook we’ve seen.

Not so when it comes to HP’s new Chromebook 11. HP seems to have pulled a Cleo McDowell and made off with Apple’s 1990s operations manual. The Chromebook 11 borrows the Apple-of-yore white plastic and rounded edges, and then tosses in an accent color (in our case, blue) for good measure. While the externals of the Chromebook 11 are pleasing, the internals are decidedly old. The Chromebook 11 features a Samsung dual-core 1.7GHz Exynos 5 ARM processor, the same chip that was used in the Samsung Chromebook we reviewed in January 2013. In performance, it’s not old-Atom atrocious. In fact, it can handle most light-to-medium chores that have the Atom-based CR-48 showing its age.

True, this is the limited-functionality Chrome OS—it’s not like you’ll be firing up too many heavy hitters on it. Still, you can bog down the Chromebook 11’s chip far easier than the Haswell proc in Acer’s Haswell-based C720. If it wasn’t for the C720, in fact, we’d probably actually think the Chromebook 11’s performance was acceptable for limited uses. But the fact is, the C720 spanks the Chromebook 11 so hard, it could charge for it.

In one test, we tried to simulate a multitasking load by starting Google Music, playing a 1080p video on YouTube, opening a Flash-based Gigapixel image browser, opening a tab for Amazon and a tab for Google Maps, running a WebGL app, and then finally running the Kraken benchmark. Guess which lost? (Hint: It wasn’t Haswell.) To be fair to the Chromebook 11, the performance of the 1.7GHz Exynos 5 actually surprised us. It’s somewhat competitive with Chromebooks based on the Celeron 847 and even gave a Microsoft Surface Pro running Chrome and Windows 8.1 a good scare when the latter’s Ivy Bridge CPU is set to Power Saving mode. We can’t help but compare the HP to the Acer C720, though. The Acer is simply more responsive and doesn’t exhibit the same sluggishness as the Chromebook 11 under heavier multitasking loads.

Surely the ARM part dishes payback in run time though, right? Not necessarily. Remember, you can’t just compare the chips without taking into account all of the other hardware around them. What we can say is that the Chromebook 11 battery life is OK. It’s certainly better than the Google Pixel and the Acer C710 with its Sandy Bridge-based Celeron. It’s oddly worse than the Samsung ARM Chromebook, which has the same SoC and battery size. What it can’t do is touch the Acer C720, which hammers six hours of use.

What does this all add up to? The Chromebook 11 has some very nice touches. The IPS screen (unheard of in sub-$300 laptops) is gorgeous, its keyboard is better than the C720’s, it’s lighter and easy on the eyes. Oh, and did we mention that you can charge it using microUSB? Sure, you have to use a beefy 3-amp charger, but the same charger can also charge your phone (unless you roll Apple hardware). Despite that, we wouldn’t take this over the performance, battery life, and price advantage the C720 has. Sorry, looks just ain’t everything.

You know how boring the Acer C720 looks? It’s so bland that your tech-toting buddy will ask you to fly wingman at the café so his new notebook can stand out next to your boring-ass Chromebook. What’s surprising about this physically unremarkable device, however, is that it’s damn near the best Chromebook out today.

First up: The C720 fixes the major problem we had with the Acer C710 (reviewed Holiday 2013), which featured power and cursor buttons that were so small they could only be actuated by that grocery store cashier with the 2.5-inch Lee Press-on Nails. The keyboard is also now the familiar standard Chromebook keyboard layout—integrated power key, dedicated search key, no Caps Lock.

The Acer C720 is plain, but she has it where it counts. No, really, she does.

Most of the improvements are inside, though. The C720 uses Intel’s brand-new 1.4GHz Celeron 2955U chip. That’s a dual-core CPU with Hyper-Threading, based on the latest Haswell microarchitecture. We know performance doesn’t matter as much in a Chromebook, but wouldn’t you like to be able to have 10 tabs open and pointed at great big, fat websites and not have your browser so bogged down it is crippled by a Flash ad? That’s what happens with the HP Chromebook 11 in any power-browsing scenario. Not with the Acer C720, which in our testing is almost as fast as the Core i5 Ivy Bridge–based Google Pixel.

In fact, in browser performance, the $250 Acer C720 is actually faster than the Core i5–based Microsoft Surface Pro in most tests when the latter is in Power Saving mode. The real icing on this Chromebook cake is the battery life. The notebook is rated for 8.5 hours of use. We didn’t get that much, but our run test—a continually looping Futuremark Peacekeeper browser test—is probably far more CPU- and graphics-intensive than most average browsing sessions, so 8.5 hours is likely attainable but, as always, your mileage may vary.

The HP Chromebook 11 tapped out at 241 minutes, the Google Pixel ran out of gas at 200 minutes, and the Surface Pro blew a motivator at 203 minutes. The Acer C720 didn’t shut down until 360 minutes. That’s more than enough to make a transcontinental flight, and a nice improvement when you consider that the Acer C710 is on vapor at 195 minutes. We won’t give all of the credit to Haswell, as we think the bigger battery and likely other hardware choices also play a part.

Not all is perfect with the C720, however. Besides its uninspired looks, the TN screen is downright blah—especially next to the HP Chromebook 11’s IPS panel. It’s not horrible off axis, but the low contrast ratio and overall bluish tone of the screen didn’t make our eyes happy for long stretches. One thing we do like though, is the use of an anti-reflective coating on the screen. While media playback and gaming might favor glossy screens, browsing is best without glare, and since we think most of what we’ll do with a Chromebook is browse, the matte finish is preferable.

Despite its shortcomings, Acer’s C720 still stands above the pack. If it had a better-quality panel, we could certainly see it receiving a Kick Ass award.