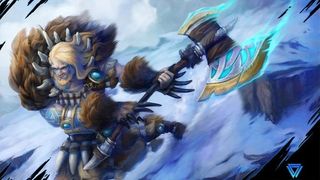 Camelot Unchained, an MMO from the lead designer of Dark Age of Camelot, had a successful Kickstarter campaign back in 2013, but it looks no closer to launching than it did six years ago. The first beta, initially planned for 2015, didn't appear until 2018 and there's still no word on a release date. In the meantime, City State Entertainment has been working on a second game, Colossus, due out by the end of the year. Oh dear.

Colossus uses Camelot Unchained's engine, but it's otherwise a separate game—a co-op PvE affair. It's a pretty wild state of affairs for a studio that's struggled to get its previous game off the ground. In an interview with MassivelyOP, CSE boss Mark Jacobs admitted that developing the second game had slowed Camelot Unchained down, but that the new game also netted the studio more investments that helped it make more hires.

"[W]ithout the push on Colossus, we wouldn’t have gotten the additional investment in CSE from our investors, which was used, in part, to expand the team significantly," he said. "That, in turn, resulted in work that will speed up the remainder of CU’s development, as well as add things that weren’t planned for CU at launch."

Over the last six months, the team's been working on a Linux-based server stack, matchmaking, tower defence features, improved NPCs and more, which will apparently benefit both games. More will also be added over the next six months.

As MassivelyOP notes, some of the money raised by the Kickstarter went into developing Camelot Unchained's engine, which Colossus takes advantage of. They have, in part, funded a game they never knew about. They will, however, be getting some compensation.

Every backer will get a free copy of Colossus and in-game currency. If Colossus is "exceptionally successful" backers will also be given more in-game cash from the game's profits. A percentage of those profits will also be spent on Camelot Unchained.

Jacobs reckons that CSE is going above and beyond by offering these things. "Legally, there was nothing stopping us from working on multiple games nor any requirement to give our current Backers any discount on it. Once we made the decision to work on Colossus, the investors (including myself) put in additional money to cover the studio’s cost for both CU and Colossus and left the PayPal money in the PayPal account. Once again, there was no legal requirement that we do that, since we are still working on CU, but I believed it was the right thing to do."

If this doesn't cut it, backers can also get refunds.