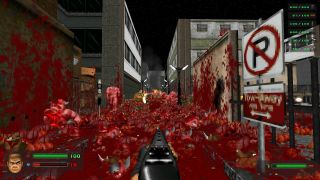 Last time we checked in on definitively superb, free Doom mod Brutal Doom, it was releasing a definitive Gold version that was pretty much expected to be the end of the thing.

But mod developer Sergeant_Mark_IV obviously couldn’t keep away from it, because they’ve released a cooperatively oriented mod called Meatgrinder Co-op. Meatgrinder Co-op is designed to be used with “slaughterfest” style maps, the kind of games that throw a small number of players against literally hundreds of enemies in vicious combat arenas. I’d suggest Slaughterfest 2012, though the Meatgrinder developer also suggests Speed of Doom as an alternative. You’ll also need a free Doom engine like GZDoom or Zandronum to run it.

The mod brings some of Brutal Doom’s enhancements—specifically the visuals and wonderful gun explosions—while focusing on improvements that make the game more playable on even the worst rigs and control schemes. It drops other enhancements, like hit locations and advanced enemy AI, for that exact same reason. It's aiming to be beautiful co-op Doom that works on a toaster and/or smartphone.

You can check out Brutal Doom on ModDB, and download Meatgrinder Co-Op mod on that same page.

Speaking of Doom, the 2016 version which is very good is also very cheap right now.