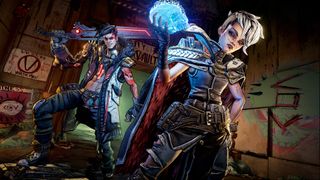 Pretty much everything you do in Borderlands 3 nets you experience, but if you're looking to reach level 50 fast, prioritization is key. Once you hit the level cap, experience keeps cultivating towards an infinite supply of Guardian Rank points. The leveling never ends in Borderlands 3, even though life does. To make the most of our limited time breathing, here’s a few pointers for how to go about leveling quickly and efficiently in Borderlands 3.

Not only does the campaign pack the biggest and most frequent experience rewards, but playing it unlocks extra abilities and gear slots you’ll want sooner than later. This one’s a given, but don’t expect beelining the campaign to bring you close to the level cap. There’s plenty more work to do.

While running about the map, be sure to zig-zag, if only to reveal more of it and in turn more collectibles. Each pumps out a decent experience bonus, so make a pitstop when sensible.

But don’t try to find them all at once

More one-off fights and doodads get tossed into each zone after a certain point in the story, so cleaning up a zone early on won’t actually clean up the zone. It’s more efficient to complete everything once it’s all been unlocked to avoid retreading the same ground and wasting precious leveling time.

Save the bulk of sidequests for later

Some sidequests reward weapons with stats rolled at your current level. To make sure they’re not instantly useless, it’s best to save those sidequests for the path from level 40 to 50. Besides, sidequests will continually match your level once you’ve finished the campaign. Maximize their benefits by saving some for last.

Look for artifacts with experience bonuses

It takes a while to unlock the ability to equip artifacts, but once you do, the opportunity for XP bonuses rears its bonus-y head. I found an artifact with a 7% bonus to experience, which isn’t a paltry amount in the slow trek from level 40 to 50. Every bit helps.

Play with a high-level friend

Co-op play with a high-level friend in their campaign will really juice the experience gain, doling out level-ups every few minutes if the gulf between you and them is large enough. Granted, this means you’ll likely see quests and locations you haven’t unlocked yet, so it’s best to save friend-leveling for quickly powering up a second, third, or fourth character.

With the campaign wrapped, some infinitely repeatable quests become available. You’ll find the trials at old locations, so scoop them up while cleaning up sidequests and collectibles. Finishing them quickly yields better rewards, but it’ll take some work. Each trial specializes in different enemy factions and environments, throwing a ton of the toughest goons in the game at you before wrapping with a stubborn boss. Each is one hell of a concentrated dose of experience and loot. Master them.

Mayhem Mode is a toggle you can enable or disable at any time to increase the difficulty and ensuing rewards once you’ve finished the campaign. With three levels of difficulty to work through, Mayhem Mode pairs well with the endgame trials as a precursor to a second playthrough in True Vault Hunter Mode. By then, you’ll be in the same endgame grind as everyone else, that endless thirst for a higher Guardian Rank and slightly better gear from here into infinity (or the next DLC release).