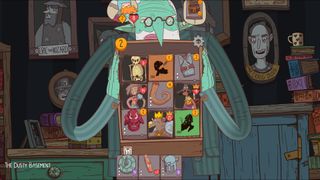 Unfortunately, I was not blessed with the greatest patience in life and this carries through to videogames. I like punchy combat and quick fights, so games that require me to sit down, think about strategy and give me all the time in the world to do it—not really my vibe. But when I spied Slothwerk’s Meteorfall: Krumit’s Tale, I was completely charmed. Its loopy characters and colourful art seemed a little more tongue-in-cheek compared to other deck-building behemoths like Slay the Spire.

Meteorfall: Krumit’s Tale is a deck-building roguelike that's the second game in its series—the first, Meteorfall: Journeys, was only released for iOS and Android. It features many of the same whacky characters from its predecessor but the deck building mechanics have been completely revamped for PC.

You have been summoned to battle through this card-based dungeon by a mysterious shopkeeper named Krumit, although why he has asked you to complete his cardboard quest is a secret. Maybe he's asked you to playtest his magical new CCG—who knows?

Each dungeon is made up of a 3x3 grid created from items in your deck and enemies. To complete a dungeon, you need to clear it of all evil do-ers—skeletons, goblins, Bearbearians, the lot—by defeating them in battle. When you remove a tile a new one replaces it until there are no enemies left. When you kill enemies you gain gold that you can use to buy shiny new equipment cards that go into your hand. Items have a durability cost meaning you will replace them as you progress throughout the dungeon. With cards being used up and new ones being bought, your hand is constantly changing as you progress, making you switch up your technique on the fly.

Meteorfall: Krumit’s Tale is currently in early access, and Slothwerks will be adding in more to it as they go. Currently, there’s only one hero to play, but Bruno is a gem of a character. He’s a pouty, sassy knight, waving his sword in an enemy's face right before he whacks them. Bruno’s overconfidence fuels my boldness and my health pays for it. However, Krumit’s Tale lets you discard cards in exchange for a small health boost and more gold. You obviously lose that item, but it opens up more options to you as you play. It's a flexible and forgiving roguelike, which I am thankful for because I tend to go in wildly, swinging my weapon around all over the place.

As you continue further into the map, enemies will have tricks up their sleeves like poison, pierce, or ambush, but you can prepare for these crafty foes. In between dungeons, you can buy more powerful weapons and equipment that will get shuffled into your deck, as well as a perk that helps you on your quest.

Krumit’s Tale also has great attention to detail that really gives it a gratifying sheen. Purchasable items are in a dusty, old mint tin that pops open; the abilities you get are in the form of uniquely drawn postage stamps; and skeletons rattle as you strike them. The animation is bouncy, fluid, and brings everything to life. I love the way that Krumit cackles and coaxes the player on, his long arms curving around the dungeon, like a puppet master overseeing events.

Every item, map, power and enemy has chuckle-worthy flavour text. The ability cards have some of my favourites with the Taunt card reading, "Bruno used to practice his taunts in the mirror—'Come at me, bro!'—But, they were too effective, and he had to stop. Mirrors aren't cheap after all."

Slothwerks estimate that Meteorfall: Krumit’s Tale will be in Steam Early Access for six to 12 months, but it already has more than enough to be worth checking out now, and moreheroes, cards, and game modes on the way. For a game that you could spend your lunch money on, it’s a steal.