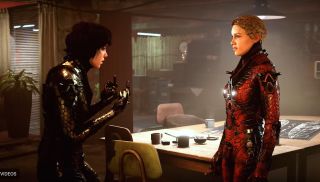 Wolfenstein: Youngblood, the tale of two sisters on a journey of self-discovery and Nazi-killing in Paris, was slated to come out on July 26. For some reason, though, it's actually going to arrive a day sooner on PC.

I don't know why the release has been moved up and Bethesda, as of right now, hasn't said. It may be because the PC-centric QuakeCon kicks off on July 25, and letting it go a day early would be a nice bone to throw to attendees, but that's strictly a guess.

Interestingly, Steam still lists it for July 26, but the new date was also shared through the official Wolfenstein Twitter account so I assume we'll see the Steam page update shortly.