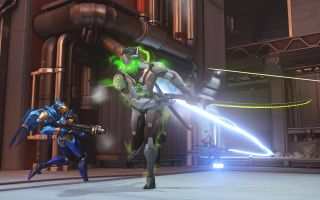 Overwatch Contenders season zero came to an end last weekend, with Immortals winning the North American tournament, and eUnited emerging victorious in the European tournament. Excellent Winston play and smart engagements told the majority of the story in the Contenders finals. There was very little variation in any of the winning compositions as the current meta continues to be rather solid at the highest levels of competitive Overwatch. Let’s take a look at a couple of clutch plays from the grand finals.

There were a lot of close matches in the European grand finals. Even though 123 seemed to have the upper hand in a few engagements, they had some positioning issues that proved to be fatal as they were only able to salvage one match in the end. Several rounds went into overtime, but eUnited took came out on top thanks to some smart ultimate management and amazing Winston plays by Sharyk, who took advantage of the aforementioned positioning blunders by 123. Take a look at the following play on Anubis:

It’s difficult to say what exactly 123 was trying to accomplish here. They were in no position to be so aggressive with no ultimates to build an attack off of, and they lose the engagement without putting up much of a fight. Even if Sharyk didn’t have Primal Rage up, attacking point B up the middle with less than a full team almost always results in failure since the defensive spawn point is so close. In this case, he’s able to use his zoning ultimate to clean house, creating a debilitating spawn stagger that bought eUnited precious seconds to get back into position.

Many people are calling Immortals’ run in Contenders one of the most impressive displays in modern professional Overwatch. They dominated almost every team they played in the North American brackets, even going three wins to zero on Faze and Kungarna in the playoffs. Team Liquid was the only team to take a match from them in the grand finals, but Immortals made quick work of them other than that. The shining star for Immortals was Fate, the recent South Korean addition to the roster that has been doing some serious work. His incredible Winston play was second to none, coming up with kill after kill and creating invaluable space for his DPS and support players to get work done. This play on Gibraltar is a perfect example:

With Team Liquid threatening, Fate jumps on the point and takes advantage of a perfect zoning opportunity, using Primal Rage to rack up a few kills and giving his team some much needed breathing room. Remember, even if you aren’t in the position to get kills, your biggest strength with Winston is the ability to keep people off the point in situations like this.

While every long-standing meta tends to get a little stale after awhile, it’s hard to deny the effectiveness of burst damage and mobile tanks. Now that almost every team has been using more or less the same composition on every map, mind games and head-to-head skill have been more and more prevalent in Overwatch esports. One of the biggest driving forces in the meta right now is Genji. Whether it’s by proactive decisions or reactions and timing, Genji players are often responsible for winning or losing very close battles.

For starters, Genji might force Zenyatta to save Transcendence to counter Dragonblade. It’s rare to see a team without Zen these days, so this can be a good way to bait and cancel Transcendence if you have something like Tac Visor ready as an uncontested follow up. Another thing to consider is that since Genji can get to high places, heroes like Soldier: 76 and Widowmaker aren’t able to abuse ledges with impunity. Watch what Agilities does to Team Liquid on Gibraltar:

The defensive ledge on point A is one of the most popular perches for hitscan defenses, but it’s often nullified by crafty Genjis who can sneak up and flank unsuspecting players. Here, Agilities single-handedly creates a four on two situation for Immortals. Had Immortals not fielded a Genji in this situation, it would have been much more difficult, if not impossible, to prevent the payload from being stalled out.

There are a lot of preliminary events taking place before Overwatch League gets underway. There’s Overwatch Contenders, of course, that’s going to be advancing to season one on the week of August 14th. The best teams from the recently ended season zero will be invited to fight for their share of a $100,000 prize pot. As stated some time ago, both Rogue and EnVyUs have direct seeds into season one, so the North American competition will be very heated. One thing to look forward to is that all matches will be streamed, so you don’t have to worry about missing any matchups this time around.

The Overwatch World Cup 2017 will begin in China on July 14th. All national teams will be represented by the best talent from their respective countries, with the final event taking place in Anaheim at BlizzCon in November. Though there have been some complaints that there aren’t many good LAN tournaments for Overwatch, at least the World Cup can satisfy that requirement for a little while.

Last, but not least, there’s Overwatch League itself, which is supposed to get started at some point this year. The rollout for Overwatch League has been nothing if not dramatic, with rumors of high franchising fees and teams dropping left and right. It’s difficult to tell at this juncture whether or not Blizzard will be able to get Overwatch League off the ground in 2017, but it’s still being looked at as one of the most ambitious esports projects of our time. The only thing we know with any certainty is that players were sent self-scouting report emails a few days ago so that owners can have a better idea of what the talent pool has to offer.