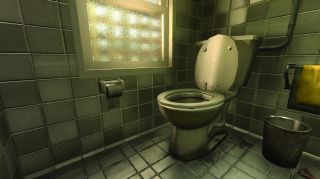 This article was originally published in PC Gamer issue 298. For more quality articles about all things PC gaming, you can subscribe now in the UK and the US.

There came a point in history when humans stopped shitting on the ground and started shitting into a receptacle, and the toilet was born. The people of Mohenjo-daro, an ancient settlement uncovered by archaeologists in Pakistan, were using toilets as far back as 2800 BC. The Romans figured out how to flush them long before the invention of the iPad. And the Han Dynasty built their toilets above pigsties so they could simultaneously empty themselves and feed their livestock.

Today, the human race’s obsession with the humble commode, and the activities that occur in and around it, has manifested itself in an exciting new way: the videogame toilet. I’ve always been fascinated by the idea that every time work begins on a new game, someone has to model, texture, animate, script, and record sound effects for something so mundane. But the truth is, videogame toilets are incredibly important.

“Toilets are valuable precisely because they have no real relevance to the game at hand,” says Fullbright’s Steve Gaynor. “They exist as interactive objects to flesh out the ‘realness’ of the game world as a functional place. It’s about supporting player expectation. If there’s a bathroom, there should be a toilet. And if there’s a toilet, it should flush. It’s these little pieces of seemingly pointless interactivity that maintain the illusion of being inside a functional other place, not just a place-shaped box.”

Toilets also reveal something about the people who build them. You can tell a lot about a developer’s approach to world-building by the authenticity, and flushability, of its crappers. “They’re a direct peek into a studio’s personality,” says Blendo Games’ Brendon Chung. “It’s very personal and it’s very revealing. We spend a lot of our lives trying to understand each other, and a toilet is a moment of vulnerability.

One of the joys of toilets is how familiar we are with them,” Chung adds. “I couldn’t tell you the first thing about a plasma bolt cannon, but we’re all familiar with the minutiae of toilets, resulting in plenty of latitude for designers to play with expectations.”

Developers are well aware of players’ fascination with toilets, and they’re always leaving surprises there: whether it’s loot, a hidden enemy, or in BioShock Infinite’s case, a raw potato. According to Arkane’s Shawn Elliott, the man responsible for that potato, this relationship goes both ways. “The proliferation of flushable toilets nudged designers to include content in and around them,” he says. “And this encouraged players to go poking around in them, which pushes designers to continue the tradition.”

But why a potato? Initially, Elliott is evasive. “In an act of meta-commentary I placed a consumable potato in one of Columbia’s toilets,” he says. “It was an interactive pay-off for inquisitive toilet inspectors, and also an acknowledgement of the absurdity of where items are found in our world. Pineapples in cash registers and so on.” He adds: “really, though, it just looked like a turd.”

I asked several developers what their favourite videogame toilet was, and the same game kept coming up: Frictional’s psychological horror game Soma. “There’s an incredible toilet in the first few minutes,” says Brendon Chung. “You have fine analogue control over the toilet seat and flush handle. Flush it and you see the water swirling in the bowl. This is an absolutely luxurious amount of control reached by no other developer.”

“One of the big problems in game design is figuring out what to fill the world with,” says Frictional’s Thomas Grip. “Offices and storage rooms are used a lot, but it can be hard to make them feel natural. But with bathrooms the space is well-defined and there are a lot of simple and fun interactions such as flush handles, stall doors, and hand-dryers.

"Many of the environments we go through in games are supposed to have been inhabited by humans. A game might be set in a laboratory, but it needs to make sense for people to be there. And if there are, or were, humans in your environment, you certainly need to fulfil two needs: eating and shitting. Food can be handled simply with, say, food containers littered around the place. But unless the situation is really dire, humans require a specialised place to do their business. So in a way, toilets are part of the justification for having that cool laboratory.”

There’s something about entering a bathroom in a horror game that somehow puts you on edge more than any other location. “Public toilets are strange,” adds Grip. “We’re surrounded by people as we do something that is very private to us. So there’s an underlying tension to visiting one. They make us feel vulnerable, which is perfect for horror. They have fluorescent lights that flicker. They’re usually white, which is a great contrast to filth and blood. Clinical yet dirty at the same time. The stalls are a great place to hide things in, and you can use the gap in the door to give players an early hint of something horrible inside. There are drains and faucets that drip and create nice ambient sounds. And there are mirrors, which you can do all kinds of scary stuff with.”

As for the process of building a videogame toilet, it can be a surprisingly tricky task. I ask Frictional artist Aaron Clifford, who created Soma’s peerless khazi, about the process. “The toilet was in good shape, but I wasn’t happy with the flush. It didn’t do it justice. It was impossible to make a decent swirling effect using particle systems, so I used an animated water texture that moved along a strip of polygons. Then all I had to do was bend and twist the strip to have the water flow down the bowl.”

That’s a lot of effort and ingenuity to expend on a toilet, but it’s completely worth it. If it wasn’t there, or it didn’t flush, you’d be disappointed. “Certain players want maximum value for money,” says JP LeBreton, a designer who worked on BioShock and The Cave. “Every inch of the world must dance for them if they demand it. A player chooses, a toilet obeys.”

But toilets are more than just props. A toilet is a porcelain window into the soul of the artist who created it, and through it you can learn a lot about their personality and their design philosophy. And they reveal something about us as players too. Our expectations, desires, and what it takes to make us believe in a game world. So the next time you pass a virtual toilet and, of course, attempt to flush it, take a closer look at what happens. You may be able to divine some hidden truth about the game you’re playing and the people who made it.