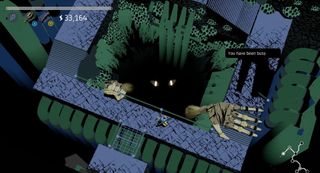 (Image credit: Creature in the Well)

Lauren Morton played Creature in the Well, a pinball dungeon crawl that sure does sound intriguing. You run around in a dungeon slamming a ball into bumpers with your weapon, like a series of puzzle rooms designed by a villain who played too much of The Addams Family pinball back in the day.

Christopher Livingston has been playing Spellcaster University, a management sim that lets you construct your own Hogwarts (or maybe Unseen University if you're more of a Terry Pratchett fan), and protect it from rampaging orcs and the lord of evil as well as the students' own magical mishaps. It's such a good idea I'm surprised there aren't more games like it.

Samuel Roberts replayed XCOM, picking up an old save from The Enemy Within expansion and finding it full of soldiers named after people that he used to know. Like a Gotye song, but with more sectoids. This is Sam's last piece for PC Gamer, as he's off to an exciting life of attending every single comics convention. Bye, Sam!

Also on the European side of PC Gamer, Malindy Hetfeld is playing Hades and finding that even though she doesn't normally play roguelikes this one has captured her imagination. Supergiant keep making games in different subgenres and it keeps paying off. There's an interesting interview with them over at Kotaku that's worth reading.

Sam Greer played post-apocalyptic road trip Overland, and found its procedural elements underwhelming, making it hard to care for the randomized characters as well as resulting in some frustrations. I know my eyes involuntarily glaze over when I see the phrase "procedural elements" in a game's description these days.

I played I Love You, Colonel Sanders! By which I mean I made some suggestions to my girlfriend while she played, including that we put the moves on the hot young anime version of the Colonel. We got a game over for that. Oops. It may just be an ad for chicken but it's a funny ad for chicken, and I'm glad the studio who made a VR fortune teller and a visual novel about a witch at summer camp got paid to make it. It made me laugh more than Borderlands 3 did.

But enough about us. What about you? Is anyone playing Stygian: Reign of the Old Ones, the turn-based Lovecraftian RPG? Or how about Untitled Goose Game, which has some excellent waddling animations and makes it tempting to honk even when you're trying to sneak? Or the anime vampire action of Code Vein? Let us know!