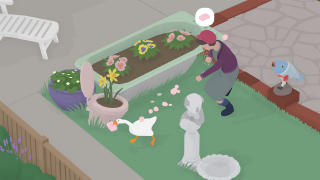 House House's Untitled Goose Game has picked up the top honour at the 23rd Annual DICE awards, taking home the Game of the Year award.

At the awards ceremony held in Las Vegas, House House beat out Death Stranding, Control, Disco Elysium and Outer Wilds to be named the best game of 2019.

To top things off, it also won the Outstanding achievement for an Independent Game award, where it beat out A Short Hike, Disco Elysium, Sayonara Wild Hearts and What the Golf?.

That horrible Goose didn't win everything, though. Remedy must also be happy with Control's performance, as it won Action Game of the Year and the Outstanding Achievement in Art Direction, Game Direction and Music Composition awards. That means it was the biggest winner of the evening, taking four categories compared to Untitled Goose Game's three and Death Stranding's two.

It wasn't just Untitled Goose Game representing the little developers, as other indies also saw success in the awards. Disco Elysium won for Outstanding Achievement in Story, Baba is You won the award for game design, and VR rhythm shooter Pistol Whip won Immersive Reality Game of the Year.

If you want to see the full list of nominees for each category, visit the Academy of Interactive Arts and Sciences' website.