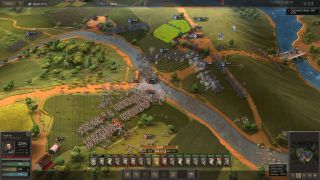 My knowledge of American Civil War strategy is limited to those (excruciating) episodes of Twin Peaks where a mentally distressed Ben Horne re-enacts the historical conflict, but I gather that Ultimate General: Gettysburg, and its sequel Ultimate General: Civil War, have been extremely well received by strategy fans. Now, after a period in early access, the latter game has been declared 'finished enough' and finally released for real.

Ultimate General: Civil War, available on Steam here, allows you to redo the American Civil War as either a Union or Confederate General, in a huge campaign mode that offers "around 14 grand battles and 24 smaller battles for each side." You can of course also engage in standalone historical battles at key locations including Gettysburg, Cold Harbour, Stones River and several others.

You'll find more info on the Steam page, but here's a quick precis from the release announcement:

"You will gradually progress through key battles of the American Civil War and expand your forces from a small division to a grand army of multiple Corps. Utilizing a wide range of choices, you may choose the best armament and officers for your units and organize your army into Corps, Divisions and Brigades with extreme detail.

"Your army design pays-off in the battlefield where you command your units on beautiful, hand-drawn maps and test your tactical skills vs a clever AI opponent. The battles can become enormous and the armies huge, involving hundreds of thousands of soldiers! Your final goal is to capture Washington for the Confederates or Richmond for the Union."

If you've been playing version 0.97 of Civil War, then don't expect any changes, "except a few minor text fixes and the removal of the 'Report Bug' Button. You can still report issues, using the F11 Key."