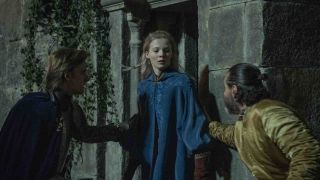 Geralt crests a hill and watches an impossibly long train of black-clad Nilfgaardian soldiers marching through the Amell Pass—which, as we learned in episode one, leads directly to Cintra. We're witnessing the beginnings of the invasion. We also check in with Ciri, long after the invasion, looking for passage to Skellige in a village. A kindly woman offers to give her a roof over head head and some food; Ciri repays her by stealing one of her horses and galloping away.

The Witcher's freeform chronology is particularly evident in this episode, which jumps between time periods like Yennefer leaping through those portals in episode four. If you've been paying attention to my episode scores, you'll notice this is the lowest number of stars I've given the show so far. This is a mostly forgettable episode, with little in the way of revelation, a lot of retreading of old ground, and a distinct lack of humour. Jaskier can be annoying sometimes, but man, I wish he'd turned up here to tell a joke or strum his lute.

In the depths of Cintra's castle, Geralt tells Mousesack about seeing a "sea of black and gold" in the Amell Mountains—the Nilfgaardian army. As they talk, a group of assassins comes after Geralt, sent by Calanthe. He survives, obviously, and angrily confronts her. Geralt wants Ciri, to protect her, and Calanthe is not into it. Mousesack reminds her that Geralt claimed Ciri via the Law of Surprise and that not handing her over would be defying destiny. And as has been proven many times, trying to outmanoeuvre destiny in this world is not wise.

"Ciri is all I have left of my daughter." says Calanthe. Since the events of episode four—which in the show's timeline was twelve years ago—Princess Pavetta and her husband Urcheon, the formerly hedgehog-faced knight, have apparently died at sea. Geralt tells Calanthe that if Ciri survives, Pavetta lives on, and she reluctantly agrees. Or does she? Geralt approaches and introduces himself, but when the girl turns to the camera, she is most definitely not Ciri. Calanthe is trying to fool Geralt, but he rumbles her when he sees the real Ciri outside, disguised, playing knucklebones with a group of commoners.

This moment was our introduction to Ciri in episode one—although we never saw Geralt back then. From here on, this episode has some fairly heavy crossover with the first episode of The Witcher, so it might be worth revisiting it to remind yourself of a few things. Geralt confronts Calanthe and she's unapologetic about the ruse. She blames Geralt for Pavetta's death. If he never lifted Urcheon's curse, she might never have gotten married, and she might still be alive. King Eist, who has just returned from Skellige, criticises Calanthe for not honouring the Law of Surprise. Geralt says he'll return if Ciri is in danger.

In Nazair, Nilfgaardian soldiers watch over an excavation of some kind, near a massive, black, volcanic-looking rock formation—a magnalith. Throughout the season we've seen these things jutting out of the landscape, and I wonder if they'll serve some greater purpose in the next season. "Report any findings immediately!" a soldier yells at some beleaguered-looking miners. Yennefer rides in and meets Istredd, her old pal and former lover, from Aretuza. He has a beard now. That's not important, I just thought I'd mention it.

He's looking for something: an object related to a prophecy, and Nilfgaard is funding his search. He tells Yennefer about how great Nilfgaard is, how it looks out for its people. Seems he's sipping the black-and-gold Kool-Aid. Yennefer suggests they run away together, but he's in too deep. Then we meet a new character, Vilgefortz. He warns Yennefer that Nilfgaard is conscripting mages for the war and that she should go with him, to Aretuza. The Brotherhood of Sorcerers thinks she's dangerous and unpredictable—and that's exactly what he and her former teacher, Tissaia, need. He says Tissaia considers Yennefer her greatest student, and she agrees to go, ego boosted.

Yennefer walks through the stone hallways of Aretuza, hearing echoes of her past: the time she tried to kill herself, her first lessons with Tissaia. She finds her old room and startles some new students; including a girl, Fola, with a burn on her face. She teaches the girls some herb-mixing magic, which Tissaia forbids, and learns that some of these new students actually paid their way into Aretuza. Apparently the Brotherhood of Sorcerers wants students "from the best families", and not just unfortunate souls like Yen once was. She's stunned to learn that some of these girls didn't even have a "conduit moment"—hers being conjuring up a portal when she was being bullied in episode two.

Yennefer takes the girls to the "windmill"—that rocky chamber with the glowing pool of water we saw in episode two. Y'know, the one she kicked those eels into? Well, turns out those eels were her fellow students who failed to ascend—graduate, basically—and it's suggested they were sacrificed to keep Aretuza topped up with magical energy. "Enough bridled chaos to keep the curtains hung and the torches lit." says Yennefer cynically. By the way, I might be reading this whole magical eels thing wrong—feel free to correct me. This is the most confusing part of the show for me. Maybe the books explain it.

Yennefer warns the girls that becoming mages will make them infertile. She's still sore about losing her ability to have a child, but they don't seem to care. "Just because you fucked it up doesn't mean we will." says one of the students, whose father apparently paid her way into Aretuza with a shitload of horses. Tissaia appears and Yennefer confronts her about letting non-magical students into the school. "Sometimes you have to compromise in order to survive," she says. It seems the mages have shifted into self-preservation mode. Later, Yennefer bumps into Triss, who we last saw in episode three, and learns that Nilfgaard has "taken Marnadal" (probably the Marnadal Stairs, a strategically important mountain pass) and is ready to invade Cintra.

In what appears to be a fantasy version of the war room from Dr. Strangelove, Aretuza's bigwigs meet to discuss how they're going to handle the Nilfgaard situation. Some of the mages, led by Stregobor (remember that jerk?), say Cintra turned its back on the Brotherhood and don't deserve any help. Another faction, led by Tissai and Vilgefortz, say otherwise. It's put to a vote and most decide not to intervene, leaving Cintra on its own—which we know, from watching episode one, contributes to its eventual destruction. Vilgefortz says Nilfgaard winning will mean the end of Aretuza, that he, Tissaia, and others will fight to stop them. Will Yennefer join their cause?

What follows is a re-telling of the invasion of Cintra, with one too many flashbacks. We see some events from a slightly different perspective—including that of Geralt, who's in Cintra when it all kicks off—but the amount of old footage reused here is a little disappointing. We see Calanthe dying, having been injured on the battlefield; her telling Ciri to flee with Mousesack; that Geralt is her destiny; committing suicide by jumping out of a window. Y'know, all the stuff we saw in episode one, but again, for some reason.

An interesting new detail emerges, however, when Geralt confronts a Nilfgaardian soldier. He demands to know where Ciri is or he'll kill him, but the fearless grunt starts rattling off some weird religious doctrine. "We shall be born anew," he says. "Thus it shall be." Earlier in the episode Fringilla, Nilfgaard's mage, talked about the Empire adopting the White Flame—which Cahir also mentioned in episode six. So this spiel is likely to be related to that. What are the Nilfgaardians into? Whatever it is, they think Ciri is part of it. Cahir is convinced the White Flame, whatever it is, is trying to bring them together.

And so we end with Ciri alone in the countryside again—a field now, at least, and not another forest. A group of young men approach her, who she realises are the commoners she used to play knucklebones with back in Cintra. At first she's delighted to see them, but they've changed. "You don't give the orders anymore, princess." her former friend says, and they attack her, which causes Ciri to fall to her knees and begin chanting a strange ritual in an otherworldly voice.

"Verily, I say unto you: the era of the sword and the ax is nigh. The era of the Wolf's Blizzard. The Time of the White Chill and the White Light is nigh. The Time of Madness and the Time of Contempt." If that 'sword and ax' line sounds familiar, that's because Cahir said it at the end of the previous episode. Is this related to the White Flame? What even IS the White Flame? Is it something to do with the Wild Hunt, who Eist briefly mentioned in episode one? Oh, so many questions. And thus another episode of The Witcher ends, and honestly, it's my least favourite of the lot. By losing the 'Monster of the Week' structure and focusing entirely on the larger story, I think the show loses something. I hope we get to see Geralt hunt another beast before the series ends.

• In the village we see a Punch and Judy-style show crudely depicting Cintra's conquest—which reminds me of Arya encountering a similar performance in Game of Thrones. Although we get no reaction shot of Ciri watching it, which seems a wasted opportunity.

• Triss says she's been searching for Yennefer "for years", which is a detail that the script dedicates no further time to. Triss's role is pretty minor in this series, it seems, so perhaps season 2 will be her time to shine. A Geralt/Triss/Yen love triangle seems likely.

• When Calanthe tells Ciri to leave her, Ciri screams and some cups on a table vibrate slightly—foreshadowing the eruption of magical energy that helps Ciri escape Cahir at the end of the first episode. Well, foreshadowing in her timeline, not ours.

• Ciri catches herself talking to her stolen horse, then wonders what kind of idiot would ever talk to a horse. This is a fun little for-the-audience reference to Geralt, who frequently talks to his faithful steed, Roach. It's the only real glimmer of humour in the episode.