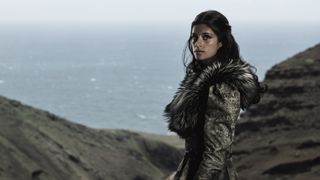 We open with Jaskier, who is still tagging along with Geralt, writing a new song. The witcher has been gone for an hour, hunting a monster, and the men who hired him are getting restless. They settle on Geralt being dead and decide to steal his saddlebags, but Jaskier protests. Things are about to turn violent, when a kind-faced old man—Borch Three Jackdaws—steps in, accompanied by two Zerrikanian warriors, Téa and Véa. In a flash, Téa snaps the thief's neck. Then a monster's bloody head lands with a thud next to the group—Geralt has finished his hunt. "I've been looking for you, Geralt of Rivia." says Borch.

This is another entertaining Monster of the Week episode, to borrow a term from The X-Files, but with a twist. A hero hunting a dragon might sound pedestrian for a fantasy series, but The Witcher continues to upend genre tropes, mutating this well-trodden tale into something more interesting. There are some fantastic moments here, and one so corny it made me wince. We also see more of Geralt and Yennefer's tumultuous relationship. It's a strong episode, but the third—Betrayer Moon—remains the highlight of the series so far. The show does horror brilliantly , and I wish it would do more of it.

We're in a large, rowdy tavern, the Pensive Dragon. Borch says dining with a witcher is a first for him—and he has very few firsts left. Apparently a green dragon has been spotted in King Niedamir's mountains. Some locals went after it, trying to pilfer its treasure hoard, but they succeeded only in wounding it. As Geralt and Borch discuss the dragon, Jaskier tries his best to charm Téa and Véa, describing their necks as like "a sexy goose, guzzling." Smooth.

King Niedamir has commissioned a hunt to kill the dragon, and Borch wants Geralt to be on his team. The witcher refuses, saying he doesn't kill dragons—that is, until he sees who's on the other team. It's Yennefer, resplendent in furs, staring at him with those dreamy violet eyes. Jaskier, remembering the events of episode five, wants to get as far away from her as possible. But before the bard can finish his protest, Geralt grunts: "I'm in." Borch is delighted—Jaskier, not so much.

The next day, the hunt begins. The foul-mouthed, ill-tempered leader of a team of dwarfs, Yarpen Zigrin, shakes Geralt's hand. We also see that Yennefer has an escort of her own—a pompous knight called Sir Eyck of Denesle, whose too-shiny armour glints in the sun, and who cries "For kingdom and glory!" completely unironically. This is the kind of character who usually plays the hero in dragon-slaying fairytales, but in the world of The Witcher he's just an asshole. And there's another team, the Reavers, led by an unpleasant chap named Boholt.

On the outskirts of Brokilon Forest, Mousesack—well, a shapeshifter called a doppler that is posing as him—walks with Ciri and Dara. The pair quiz the druid—about how he survived the siege of Cintra, and why it's so important that Ciri and Geralt meet. The doppler grows impatient with their questions, and Dara notices something is off with him. They leave Brokilon and find themselves back in the dead, wintry woods Ciri has spent most of this season lost in. Adam Levy is great here, giving Mousesack's evil twin a genuine air of menace.

Back at the hunt, Jaskier breaks away from the group to pick some berries, disturbing a creature in the process—a weird, slightly pathetic-looking monster called a hirikka. Geralt says the creature is probably starving, to leave it alone. But then Eyck charges in, slicing the helpless beast into monster sushi with his sword. Later, the idiotic knight cooks and eats the hirikka, which gives him the shits. He dashes away to empty himself, then the next morning Yarpen finds him with his throat cut, dead. Yennefer think the Reavers are responsible.

In the forest, Ciri finally catches the doppler out with a question about Mousesack's homeland, Skellige. The shapeshifter has finally had enough and reveals itself. "Our name is not Mousesack!" it shouts, before revealing to Ciri that it killed the real druid. Dara attacks with a dagger, but the doppler wrestles it off him—until it starts burning its skin, for reasons that are unclear, causing it to drop it.

Dara grabs the dagger back and holds it against the doppler's neck. "The man with the winged helmet," says Ciri, referring to Cahir. "Why is he going to so much trouble?" Before the shapeshifter answers, there's a scuffle, Dara is injured, and Ciri runs into the forest. She sure likes running through forests. Then a Nilfgaardian soldier, clad in that weird, organic-looking black armour, grabs her. She wakes up in a room with Cahir looking at her, telling her not to scream. He understands why she's afraid, he says. It was never his intention to torment her.

We return to the dragon hunt and Yarpen is telling Geralt and co. about a shortcut that'll help them get ahead of the Reavers. The shortcut is a rickety wooden platform pinned precariously to the side of the mountain, with a deadly drop below. There's a great helicopter shot here which pulls away from the mountain, revealing the sheer, dizzying size of it—and how small the characters look clinging to it.

In the process of taking the shortcut, Borch, Téa, and Véa all fall to their deaths. Geralt seems distraught, but a night with Yennefer in her strangely luxurious tent seems to cheer him up. The next morning they climb the mountain and find the dragon's lair—a cave carved into the rock. Only the dragon appears lifeless, curled up next to a large egg. Téa and Véa, who are very much not dead, suddenly appear. "No closer." Geralt realises the green dragon is dead, and is stunned to see another—a mythical gold dragon—appear in front of him.

Remember Borch? Well, he isn't dead either—he's the gold dragon. He lured Geralt there, knowing he doesn't slay dragons, to protect the egg from the King's hunting parties. Then, right on cue, Boholt appears with his Reavers. A fight erupts and in perhaps the cheesiest moment of The Witcher so far, Geralt and Yennefer share a mid-battle kiss as he blasts a bunch of Reavers out of the cave with his Aard sign. One of the Reavers tries to reach the egg, but Borch toasts him. The dust settles, our heroes are alive, and the egg is safe. Quest complete.

Borch thanks Geralt and Yennefer for their efforts. As they recuperate, Yen realises the reason they can't keep away from each other is the wish Geralt made in episode five. She's frustrated by this discovery, wondering how she can know if they feelings they have for each other are actually real. "Disregard for other people's freedom has become quite your trademark." she says, wounding Geralt. The witcher responds by saying that her mission to cure her infertility is pointless; that a child won't boost her fragile ego. They part ways angrily.

"The White Flame has brought us together." Cahir, who seems to be showing us a softer side, tells Ciri. But she doesn't trust him. And would she? He's been chasing her for six episodes now. Then the doppler appears, disguised as Cahir. They fight. The doppler says Cahir is insane for believing in "the prophecy." Cahir (the real one) slashes the shapeshifter's face and the creature runs away.

I'm not exactly sure how she gets there, but we cut to Ciri tied up in the woods. Yes, she's in the woods again! A figure appears in the foreground, who we think is going to be the doppler, but in fact turns out to be Dara. He cuts her free, but the pair argue and go their separate ways. Elsewhere, Fringilla—one of Yennefer's fellow Aretuza students, now a mage for Nilfgaard—tends to Cahir's wounds. Ciri is the key, she says. She witnessed the White Flame calling on Chair, "anointing" him. Chair wipes the blood from his sword, looks into the camera menacingly, and says: "The time of the sword and the axe is nigh."

Well then. I was convinced, briefly, that Cahir might actually be decent. Misunderstood. Actor Eamon Farren brought a surprising warmth out of the character for that brief scene. But then, at the end, he's back to being a sinister weirdo. This makes him one of the most interesting characters in the series for me, because I have no idea what his motivations are. Who or what is the White Flame? And what does it have to do with Ciri? Things are getting interesting as The Witcher gallops towards its finale. This was a fun episode with a few memorable moments, but I hope the series returns to the darkness of episode three before it finishes its run. And if not, well, there's always season two.

• "That scent…" Geralt grumbles as he catches a whiff of Yennefer's trademark lilac and gooseberry perfume; a line he also says in The Witcher 3. It might be our hero's greatest weakness.

• We see the doppler's true form in this episode, although it looks more like a White Walker from Game of Thrones than the lumpen, pointy-eared monster we see in the Witcher games.

• Borch, real name Villentretenmerth, is one of only two known gold dragons in The Witcher's world. He's skilled in polymorphism, which is why he could appear to Geralt as a human.

• In episode four, Mousesack grabs a blue sash from Calanthe's corpse. In this episode, his evil twin uses it to convince Ciri that he's the real deal—but it's not enough to win over Dara.