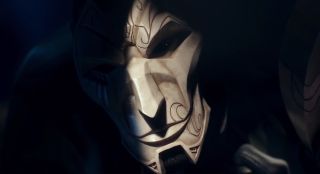 Riot has been teasing a new League of Legends champion for a few weeks now, culminating in the latest video embedded above. But after watching it, I'm not sure what to expect anymore. It's definitely one of the most visually impressive cinematics Riot has done—which is saying something, given it's ever growing library of impressive animation—but what in the Sam Hill is going on here? His bullets grow flowers and trees, but also seem to have elemental effects. Are we looking at a Mage? A Marksman? And why does his mask sort of look like Handsome Jack?

All I really know for sure is that the character will have a mask, a magic gun, and potentially a fondness for giant caterpillars who hand out size-altering mushrooms because I am tripping the hell out after watching that. Fortunately we won't have to wait long to learn more, as Riot developer Gypsy said on Reddit that "he's almost ready."

Let us know what, if anything, you've gleaned from the video in the comments below.