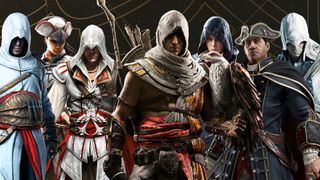 Over the course of the Assassin's Creed series we've played as a huge variety of hooded killers, from pirates to revolutionaries. And although some are memorable, likeable characters, others might as well be mannequins stuffed into elaborate costumes. So here's every main series protagonist (minus the DLC characters, because we'd be here all day) ranked from worst to best.

This guy could have been one of the most interesting Assassin's Creed protagonists. He's the son of a Native American woman and an English man—born during a time of great tension between those two cultures—and played an active role in the American Revolution. But the writers forgot to give him one important thing: a personality. Connor (to use his easier to spell alias) is an extraordinarily boring, earnest man, who sulks, pouts, and complains his way through what is also the worst Assassin's Creed game.

Another revolutionary, this time of the French variety. Arno is born into a wealthy family in Versailles, but becomes an assassin after a stint in the Bastille, a famously brutal Parisian prison. Again, like Connor, he has an interesting backstory. And I like how different he is from most Assassin's Creed protagonists: namely being a bit more loose with the whole Creed thing. He starts out cocky and kinda likeable, but then he slips on the hood and all that personality steadily drains away over the course of the game.

The original assassin. The beginning of the legend. And, unfortunately, one of the dullest heroes in the series. Altaïr looks cool, but there isn't much going on under the hood. Reviews talked about how boring he was, which inspired Ubisoft to introduce a very different character in the second game. But more on him later. There's no denying Altaïr's importance in the series' mythology, but would it have killed him to crack a joke now and again?

Aya is the the second playable character in Origins, although husband Bayek gets more screen time. She's strong and spirited, with an endearing belief in Cleopatra's ability to do right by Egypt. But, and this could be because we don't spend much time with her, her personality never really shines through. I like how her allegiance to Cleopatra drives a wedge between her and Bayek, but her driven single-mindedness also makes her a bit one-note.

Shay is an interesting addition to the pantheon of Creed heroes because he isn't an Assassin at all, but a Templar. However, even though he's working for 'the bad guys' (I personally prefer the Templars to the preachy Assassins), his former life as an Assassin himself still haunts him. He's tough and ruthless, but refuses to prey on the weak and occasionally shows mercy. He's nuanced and flawed and we need more lead characters like him in the series.

Evie is more professional and straight-laced than her wild brother Jacob, but she doesn't fall into the trap of Altaïr and Connor by letting her devotion to the Creed define her. There are glimmers of humour and humanity beneath Evie's hard exterior, and she genuinely cares for her brother despite spending most of the game scolding his recklessness. Capable, smart, and passionate, she's one of the most admirably committed leads in the series.

Growing up surrounded by wealth and privilege in New Orleans, Aveline witnessed the hypocrisy and injustice of slavery first-hand, shaping her attitude to life and eventually leading to her joining the Assassins. Relegated to an Assassin's Creed III spin-off—yet infinitely more interesting than boring old Connor—her guilt over being freed and brought into wealth while her friends suffered in slavery gives her personality a sharp edge.

Jacob is cocky, rebellious, witty, and a bit of a prick. And that's why he's one of the better Assassin's Creed heroes, because he seems to actually be having fun. He's never happier than when he's brawling on the cobbled streets of London with his brass knuckles. But he's also a fierce defender of the downtrodden, which leads to him following his father and embracing the Creed, even though early in the game it's the last thing on his mind.

Odyssey is notable for giving you the option to play as a male or female character. The dialogue is the same, but the delivery of each performer is very different. Alexios is well acted, but plays it far too straight, sounding like a dozen other gruff videogame heroes. He was always going to struggle in a series already heaving with serious, bearded men, and this only highlights how much better, and more charismatic, his female counterpart is.

The newest Creed hero and one of the best. Origins is set in the twilight years of Ancient Egypt as Greek and Roman culture sweeps in, but Bayek is a man of the old world. He deeply respects tradition and religion, but can be charming and funny too. His weakness for children in trouble, caused by the death of his son, makes his dark side particularly shadowy. But his innate good nature and natural instinct to help the weak always shines brighter.

This charismatic Welsh pirate is, at least in the early stages of the game, more concerned with fame, gold, and glory than following the Creed. And it's this attitude, along with his bawdy sense of humour, that makes his personality so infectious. He deepens and grows as a person throughout his Caribbean adventure, eventually renouncing his old life to become an Assassin, but he never loses his love of swashbuckling on the high seas.

Arguably the worst Assassin's Creed features one of the very best lead characters. You begin the third game as Haytham, and he immediately proves to be a complex, conflicted character; more than the villain his allegiance to the Templars suggests he might be. There's good in him—although it's often fogged by the work he does—and his Bond-like charm and ruthlessness make him a joy to play as. Then Connor shows up and spoils all the fun.

Even though she has all the same lines as Alexios, Kassandra sounds like she's having a lot more fun on her quest. She's fiery and charismatic, tough and charming, and one of the best heroes in the series to date. A Spartan mercenary on an odyssey of discovery, she finds herself tangling with a sinister cult and trying to track down her birth parents. Voice actor Melissanthi Mahut gives her a little of Ezio's mischievous charm.

Well, obviously. Ezio has been a fan favourite since his very first appearance, and he had the luxury of another two full-size games to develop as a character. So maybe that's an unfair advantage, but even in Assassin's Creed II he was a breath of fresh air. Witty, charming, and mischievous, Ezio is a character who buzzes with life and personality, from his younger days brawling on the streets of Florence to Revelations' moving final scenes.