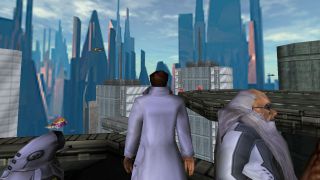 There’s an innate joy to a good cyberpunk game; that sense of fighting The Man, of struggling up from the gutter in a world that doesn’t care, of being a rebel with a cause and, more importantly, some serious hardware. Sometimes it’s a depressing odyssey, other times, very tongue in cheek. Here, then, are our pick of the games worth selling your genitals on the black market for.

Few cyberpunk games have the same indie-rock feel as Anachronox, the game from Ion Storm that wasn’t Deus Ex or Daikatana. It’s Tom Hall’s tribute to pretty much everything Tom Hall loves, from the dimension-shifting titular planet to comic book worlds, to the fact that you spend much of the game travelling with a planet as a companion. A literal planet. Shrunk down, hovering next you, its people voting on what they all want to do next. Anachronox is a janky experience to be sure, but an unforgettable one, and it’s a genuine tragedy we’ll never get the planned sequel.

9. Beneath a Steel Sky

Beneath A Steel Sky offers a different feel to most cyberpunk; a somewhat low-key, sardonic take, in a city that thrives on cruel mundanity. It’s not long before you’re digging deeper into cyberpunk tropes, however, as you battle the omnipresent computer system LINC, explore cyberspace in search of clues, and save a city that’s Blade Runner by way of Hull. Along the way you get the delightful company of your robot buddy Joey, who mirrors the genre’s love of transhumanism with his own slow evolution from humble circuit board to—well, spoilers. Best of all, it’s completely free.

It may be a fantastic adventure, but Technobabylon stands out most for having a deep sense of heart. Cyberpunk is often a cold genre, either through pessimism or a focus on the dehumanising nature of technology. Technobabylon flips that, with a story that comes at the usual elements from an entirely human direction—family, loss, isolation and community. Its icier elements remain brutal, from restaurants that serve cloned human flesh to terrorists whose bones have been turned into bombs, but it’s the warmth that makes it unforgettable. That and the jingle for T.H.E. Foods, which will, alas, never leave you.

Most cyberpunk games have you fighting against a corrupt system in some way. VA-11 HALL-A is more about helping it get drunk. It’s a mix of visual novel and bartending simulator, where you bounce between mixing drinks and talking with the bizarre visitors at your seedy bar. The trick is that, by mixing the right drinks, you can make them open up and tell you stories of the harsh world outside. Some of those guests are dogs. It’s that kind of bar. VA-11 HALL-A’s clever ideas and well realised setting are well worth visiting for a round or two.

We’re meant to give you a pithy summary of EYE at this point, but that’s just not going to happen. You won’t find many games so devoted to making your brain melt, from its convoluted plot to the way the game works. You’re an amnesiac caught in a dreamscape, and things only get more surreal when you enter the real world and find yourself surrounded by groups with names like the Secreta Secretorum and the Meta-Streumic Force. EYE is every cyberpunk trope thrown into a big futuristic blender and then spiced up with a little LSD. It’s endlessly fascinating, especially if you like Deus Ex but find it just a bit too predictable.

The System Shock series isn’t quite the same flavour of cyberpunk as most of the games on this list, but it stands as one of the first truly successful attempts at the genre. Its villain, rogue AI SHODAN, is deservedly considered one of gaming’s greatest baddies, and the first game’s take on cyberspace as a surreal maze of wireframe graphics and deadly geometric shapes certainly warrants the series its place. The sequel largely drops that element, but replaces it with a new interest in transhumanism by way of the ‘improvements’ offered by a more evolved SHODAN, who refuses to be humbled by needing to rely on a mere fleshbag.

The first Watch Dogs was more overtly cyberpunk than its sequel, but it’s also a far inferior game. Watch Dogs 2 picks up everything it did well, particularly the use of hacking as a primary weapon and a city in which everything can be manipulated, and throws out everything else. While the sequel doesn’t have much raw story, it does a great job of making new hero Marcus Holloway feel like part of something important. Watch Dogs 2 puts you at the bottom of the social ladder, then hands you a hacksaw to bring the system crashing down. Doing so makes for great set-pieces and a genuine feeling of power.

Westwood’s Blade Runner absolutely nails the style of the movie, recreating its locations with fully animated backgrounds, and offers a score painstakingly recreated by the composer from the original. It’s a brand new story in the Blade Runner universe, playing out concurrently with Deckard’s. The first act especially is a masterful bit of work, plunging you deep into the world and dripping with atmosphere. You get to perform the Voight-Kampff test, face off with replicants who aren’t afraid to thrust you into an arcade sequence without warning, and generally live for a while in a more-or-less perfect recreation of LA, 2019.

It’s amazing that we had to wait so long for either of the two big cyberpunk tabletop RPGs to make their way to PC—if you ignore Microsoft’s team-based FPS Shadowrun, which everyone really should. Despite both SNES and Mega Drive owners getting Shadowrun games in the early ’90s, we had to wait until 2013 for Harebrained Schemes’ Shadowrun Returns. The original campaign, Dead Man’s Switch, is solid enough. The sequel (originally an expansion pack before thankfully being re-released as a standalone game), is phenomenal.

Shadowrun’s take on cyberpunk is a complex one, mixing in magical and fantasy elements, with the players—shadowrunners—as mercenaries in a world gone mad. Dragonfall absolutely nails this, essentially giving you a team, a general objective to raise enough money for a big mission, and a city of opportunities to pick and choose from. It’s not a complex business simulation or anything like that, but it conveys the vibe of being a shadowrunner far more effectively than a series of mandatory missions ever could. You spend time with your team and get to know their personalities and problems, help them out, and slowly improve your gear until you’re ready to take on literal dragons.

All of this plays out in two basic modes: RPG exploration, and solid tactical combat that makes good use of your team and their abilities. The magical parts of the setting really help with these, allowing the action to go beyond guns.

The third game, Shadowrun: Hong Kong, was also an excellent RPG, but it was this sense of actually being in control that made Dragonfall stand out, both in its series and the genre in general. It’s a structural approach we don’t often see, and yet one that doesn’t get in the way of a strong main storyline and a satisfying ending. What Dragonfall lacks in raw technology, with its relatively simple engine and graphics, it more than makes up for in scope and heart.

It’s one of the best RPGs of the last few years, and one of the best cyberpunk games full stop. Harebrained is now part of strategy behemoth Paradox Interactive—here’s hoping it’s working on something even bigger and better.

Honestly, the question was never whether Deus Ex would end up topping this list, but whether this or the original would take the crown.

The first game is of course a classic, but time hasn’t been especially kind to its technology or some of its ideas, and politically it’s from a very different era. Human Revolution lacks some of its raw scope and imagination, but is a far sleeker experience that builds on what the original does so well, and what other franchises have brought to the immersive sim genre in the intervening years. Yes, the boss fights suck, and can rightly go and stand in the corner with those copies of Invisible War and Mankind Divided’s garbage ending, but in all other respects, Human Revolution still holds up extremely well as a glimpse of a possible future.

It helps that, while the original Deus Ex was largely built around conspiracy theories—groups like the Illuminati and so on—Human Revolution concentrates on transhumanism and the societal chasms between the haves and have-nots that are only widened by the addition of technology. As gravelly-voiced, professional not-asker-for- this Adam Jensen, you’re in the rare position of being in the middle of the situation, with a body full of fancy toys that isn’t exactly yours. You’re neither truly with the rich and powerful in their ivory towers, nor down with the gutter-rats, but perfectly placed to either prop up a failing society or help it come crashing down.

This gives Human Revolution a resonance that many other supercop fantasies struggle with, in a world perfectly set up to explore technology in both its positive and negative forms. The same science that can replace an arm or eyeball can also be abused, or simply demonised, with just a few flicks of a switch. Fancy cyborg gear can elevate the average person, but also make them subject to its creators in both body and soul. Is it a fair trade? What if the people just seize it?

The sequel, Mankind Divided, focuses on the social issues of all this, with questionable success. Human Revolution handles it more elegantly by simply presenting the situation, and allowing you, the player, to decide which path is correct. Admittedly, this boils down to pressing a button and watching a video clip, but still. While it lasts, it’s a solid shooter, a thought-provoking game, and also it lets you punch people through walls.