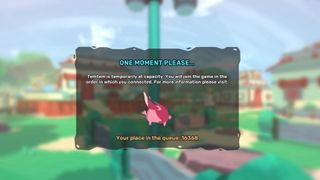 Update (7:20 pm Pacific): There's still long queue—over 6,000 when I last joined, which took about 30 minutes to wait through—but after a small patch Temtem seems to be working much better. I haven't had a disconnect and have played through several combat encounters without the freeze I ran into this morning.

Original story (12:45 pm Pacific): It turns out that 'Pokémon, but an MMO on PC' is an attractive pitch: At the time of writing, I'm around 14,000th in the queue to connect to monster battling MMO Temtem, which launched in Early Access today.

The queue was much smaller right after launch, but it quickly became clear why spots were freeing up: frequent server disconnects. I had one while creating a character, and two more in the starting town. I also got stuck in an endless idle animation loop when I directed my Temtem to use a certain ability, and had to force quit.

Hopefully Temtem can be stabilized soon, because I did enjoy what I managed to play. Its world is pleasantly cute and crisp, and the Pokémon comparison isn't overblown at all: You start by visiting a professor to pick your first Temtem from a selection of three, each of a type which is strong or weak against other types. For a detailed look at what you can expect, Rachel posted some impressions last week.

Getting lots of attention from streamers would normally be great for a launch, but in Temtem's case they all appear to be suffering from the same server disconnects and bugs I am.

Tough break, but it's hardly uncommon for online games to trip at the starting line, and Temtem may catch its rhythm this evening or later this week—it runs quite well when I actually get in to play. We'll keep checking in to see how things are progressing this week.

One note if you do decide to try Temtem out now: If you have an Xbox controller plugged in, it won't display a cursor in the menu, which took me a minute to figure out. With that taken care of, Temtem can be played with a mouse and keyboard, though the full-tilt WASD running is awkward.

Early troubles aside, the prospect of pocketing monsters on PC has clearly excited interest. Should Temtem's server issues and endless combat loops be resolved this week, we'll give its bestiary a closer look.