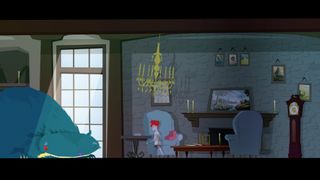 A young boy travels through a dream-like world of fantastical creatures and shadow people while learning to conquer his deepest fears. No, this isn’t the premise of the next J.K. Rowling novel; it’s Between Me and the Night, a surreal adventure game from indie developer RainDance LX.

Officially leaving Steam Early Access today, Between Me and the Night promises a tale steeped in the magical realism of a Gabriel Garcia Marquez short story and the oddness of cult classic TV show Twin Peaks. By day, the player solves puzzles inside a strange floating house. At night, they don armor and weapons to combat a young boy’s internal terrors inside an icy dreamscape.

In a developer blog, RainDance LX CEO Joao Ortega explains how Twin Peaks in particular—a show he claims he’s watched on loop since the age of 16—influenced the game.

"[In] Twin Peaks there are two worlds, the 'real' one (Twin Peaks) and the spiritual one (The Black Lodge),” he said. “They are clearly separated and each has their own mythology. In BMATN, there really isn’t a 'real' world… it’s like if Twin Peaks was set in The Black Lodge and then there was another door in there that led us to another, even more twisted reality… and we never got to see Twin Peaks at all!"

When Andy Chalk tried out Between Me and the Night, shortly after it hit early access, he found it buggy but intriguing; a bit like Kentucky Route Zero with a more willfully weird streak and a focus on more conventional adventure game puzzle solving. Since then, the game has been updated with new audio and music, Steam achivements and trading cards, improvements to mini-games based on Early Access feedback, and a few more changes and bug fixes.

Between Me and the Night is available now on Steam for $14.99.