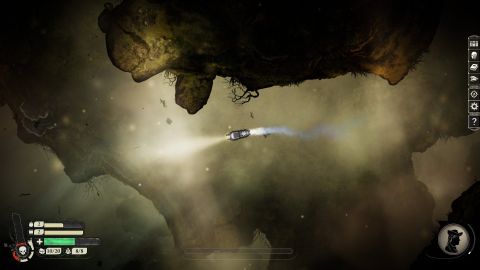 What is it? An adventure on the high skies, with roguelike elements and lots of lovely words
Expect to pay £19/$25
Developer Failbetter Games
Publisher Failbetter Games
Reviewed on Intel Core i5-8350K, 8GB RAM, GeForce GTX 1060
Multiplayer? No
Link Official site

We have a Marvel Cinematic Universe, so why not a Failbetter Interactive Universe? The third game in the world of Fallen London also has its share of daring heroics in the face of impending doom, but instead of saving the world you’re usually trying to save yourself. And in a place where time comes in barrels and souls in jars, where the horrors of the skies can cause you to lose your marbles, it’s probably easier to lapse into villainy. Not least when food supplies run out, and your crewmates begin to look awfully tasty...

The follow-up to Sunless Sea is in keeping with Failbetter Games’ fondness for putting players into crisis management mode from minute one. As second in command to a dying captain, you’ve got to guide your knackered locomotive into port and then take over. You’re free to choose your own path from there, but without a map it’s not going to be easy. Fame, fortune and a long-standing mystery are among the eventual goals, but your initial job is just to stay alive and keep your head in a place that makes it difficult to do either.

In many respects, it’s similar to its predecessor: at once a piece of interactive fiction, an RPG, a survival game and a top-down adventure. You explore the world at a slow, methodical pace in a rickety craft that can’t take much punishment, picking up cargo and the odd passenger and ferrying them between ports. On land or in the air you’ll face choices (usually between bad and worse) which can be influenced by the character you rolled at the start and the dice that subsequently determine success or failure.

Break it down to its fundamentals and Sunless Skies can sound unremarkable. It works because of how brilliantly those disparate elements combine to produce exciting stories, from scrapes you survive by the skin of your teeth, to moments where your own hubris gets you killed. It helps that death means something, because that elevates the stakes when you’re one direct hit from a yawning hole opening up in your hull and some hideous monstrosity is circling around for another attack. Or when you unwittingly get caught up in a firefight between two rival factions, one of which turns their attentions to you because you’ve been pulling favours for the other.

Where Sunless Sea fell down slightly was the way the natural repetition of its roguelike structure gradually sucked the life out of those stories: the terrors and wonders of the world were no longer, well, terrifying and wondrous. You’ll soon discover Failbetter hasn’t exactly gone soft, but it has found ways to cushion the blow. Start again, and you’ll gain much of the previous captain’s experience to spend how you like, while keeping your ship minus one installed add-on. Depending on what’s removed, this can feel like a real kick in the teeth, especially if it’s something you recently spent money on.

In other words, death is a punishment but it’s not too severe—and it can even be a blessing in disguise. Every episode is informed by the type of captain you were at the start and the decisions you’ve made ever since; some even by your immediate predecessor. And so while some things will be familiar on a replay, plenty won’t. Some changes are permanent: one port is never quite the same after an insect invasion, while another lies eerily abandoned on your next visit. On a new run, you can pursue a new ambition, or go for the same goal with a head start—only with a different backstory you can use guile instead of muscle to get through tricky situations.

Beyond the changes you make, the sheer range of scenarios and potential outcomes means you’ll discover something new on every run. This time you might risk pressing on through a storm for the chance to encounter a three-headed fox, rather than turning back because you’ve already lost half your crew and bad things tend to happen more often when you’re short-handed.

If it’s all getting a bit much, or the dice really seem to be screwing you over, dying needn’t mean starting again: when it’s game over you can choose to carry on from the last port you visited instead. And if you’re still struggling, there are extra difficulty modifiers that make enemy projectiles easier to dodge or supplies last longer.

All of which makes it easier to get to what really makes Sunless Skies great: the writing. Evocative, witty and razor sharp, it turns text into a reward: you’ll find yourself seeking the right combination of items just to open up new lines of conversation. They’re the most important currency in a game that gives you a clutch of weird and wonderful tales to tell, even when you fail miserably. In these moments you’ll realise that while you may not have achieved your goal, Failbetter certainly has.