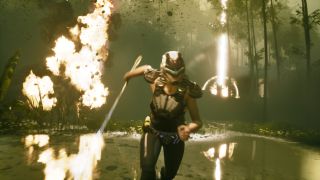 In a post celebrating its 25th anniversary, Resogun and Nex Machina developer Housemarque dropped the news that it's putting all of its projects on hold, including the Stormdivers battle royale, so it can put all of its efforts into a mystery game.

"[N]ow we are focused on delivering our most ambitious and biggest game to date," reads the update from CEO Ilari Kuittinen. This unnamed game will apparently mark a new phase for the studio, defining its "next evolution." Housemarque isn't ready to announce it quite yet, however, but apparently its publishing partner will be unveiling it soon.

This isn't the first significant change for Housemarque, which spent more than two decades designing brilliant arcade games before announcing that the genre was dead in 2017. Its last arcade game on PC was Nex Machina, a blisteringly-fast twin-stick shooter made in collaboration with genre creator Eugene Jarvis. Chris Schilling gave it 89 in our Nex Machina review, while over on RPS I foolishly tempted fate by saying "if time stopped and all we were left with was Nex Machina, then that wouldn't be such a terrible thing." It's my fault; I'm sorry.

Housemarque would go on to release one more arcade game, Matterfall, a side-scrolling shooter for PS4, but after that it dramatically switched gears. With arcade games behind it, Housemarque started work on Stormdivers, a sci-fi battle royale that didn't look nearly as much fun as the games the developer had sworn off. And now it's been put on ice. It's not clear when or if it will return.

With all the talk about scope and scale, I doubt Housemarque's doing a 180 and returning to arcade games, but I'm still eager to see what they do next—anything to give us a break from battle royales.