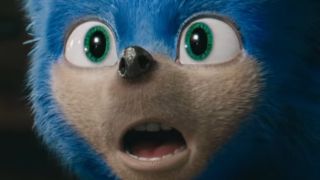 The reveal of the live-action movie version of Sonic the Hedgehog earlier this year was either hilarious or catastrophic, depending on your level of interest in the movie and its success at the box office. Paramount obviously has very great interest in seeing the movie succeed, and the backlash was so strong that a month after the grand unveiling it hit the brakes on the whole thing so it could rejigger the blue speedster.

That was a major move, and obviously not one taken lightly, but producer Tim Miller said in an interview with Variety that it was the right thing to do. "Look, I was with fans and so was Jeff [Fowler, director of the film]. When the shit hit the fan, I went over there and said, 'The most important thing to do, man, is say, ‘I fucked up'," Miller said.

"He’d already sent a tweet out an hour before I got there. He’s a good man. It was exactly the right way to handle that. The fans have a voice in this too. There’s a right way to listen."

The updated Sonic design hasn't been released publicly yet, but Miller has seen them. "And I think the fans will be pleased," he said.

Obviously he's going to say that—movie producers don't generally admit up-front that their films are going to suck—but in this case I'm just about ready to take him at his word. One advantage of a disastrous first impression is that you can only go up from there, and it's not as if they don't have a well-established Sonic design to work with. Ditch the teeth, goggle-ify the eyes, maybe do something about those freaky legs, and you're pretty much done. Right?

Sonic the Hedgehog, about a cop in the rural town of Green Hills who helps Sonic escape from government agents seeking to track him down for purposes that I bet are nefarious, is now slated to come out on February 14, 2020.