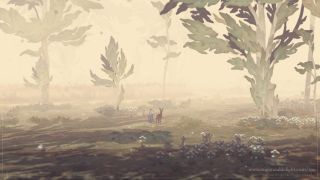 You probably know Might and Delight (if not by name) from its Shelter games about mother animals and their extremely accident-prone offspring. The harrowing experience of keeping your adorable badger and lynx children from being eaten or freezing to death has spawned other Shelter spinoffs by the studio: the "forum in game's clothing" called Meadow and lone baby lynx simulator, Paws. Earlier this year, the studio also announced Shelter 3, but that's apparently not all it has in store for us.

Might and Delight teased its fans yesterday via Steam Community post with the precursor to a formal announcement for another project that's been in the works "for the last two years." Presumably we'll get a name for this game when the full announcement is made, but we can already tell that it will have the style we know Might and Delight for: muted colors and bold textures on low-poly models. Hopefully there's less wresting my poor babies from the mouths of predators this time. My heart can only take so much.

Unlike the Shelter series, the promo image on the game's landing page shows three humans and refers to the project as "a completely new online RPG." Might and Delight says "join our band of Travellers," suggesting that our characters will be nomadic.

Might and Delight gained some experience with online spaces in Meadow, which has apparently gone well enough for what sounds like a larger undertaking than Meadow's minimalist, Journey-like interactions. We've joined the mailing list, but for now, that's all we know about this project.