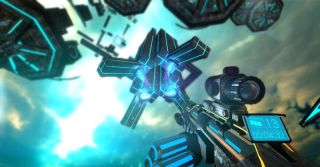 It's become a cliché to compare every first-person puzzle game to Portal, but Deadlock sort of insists on it by spotlighting a floating AI cube which speaks in vocoded tones that very nearly replicate GLaDOS's disharmonious voice...except with a French accent. But hey, Portal's not a bad inspiration, and Deadlock's sci-fi platforming is promising. A team of French developers created the prototype as a 7 Day FPS Challenge project, and recently began seeking funding via Ulule to spin it into a fully-realized game.

The goal of Deadlock is to ascend a high-tech beanstalk while avoiding the wrath of its AI security system by A. jumping, and B. using your "Switch Gun" to turn the tower's systems on and off. The Unity Engine is artfully used to render sleek gunmetal and neon architecture, and the gameplay concept has legs. Or, at least, you have legs. To jump with, because jumping and air control are important in Deadlock. The gravity feels a bit strange, like the parabola of my jump plateaus for a moment at its vertex, but it is nice to use double-jumps again. I want more double-jumping.