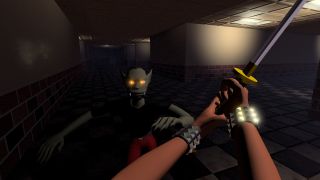 Not to be confused with System Shock, Slayer Shock is the latest venture from Minor Key, who'll remember from Eldritch and Neon Struct. It is also Buffy the Vampire Slayer but in game form, concerning a team of Nebraskan vampire slayers operating out of a college cafe. You'll take on "missions to patrol the streets, rescue captive humans, and weaken the undead threat". To help you out, "a team of fellow vampire slayers assists you from HQ, providing new weapons, skills, and research". I've enjoyed hearing about it from creator David Pittman's Twitter feed for a while now, but here's a new trailer, shock-full of footage.

If that doesn't seem Buffy-y enough, know that it boasts a format that "lovingly recalls scripted television (missions are 'episodes', each campaign is a 'season')". Let's hope each episode begins/ends with a catchy theme tune and credits sequence, for that proper '90s feel.

"Immersive first-person action, lightweight strategy, and procedural narrative" are also things to expect, and that last one in particular sounds pretty intriguing. We'll hear more about the game—including a release date—"soon", according to Pittman.