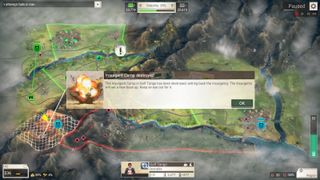 Originally released on Android and iOS earlier this year, Rebel Inc: Escalation—follow-up to apocalyptic virus management sim Plague Inc—is headed to PC, expanded and enhanced, and entering Early Access this October, with a full launch planned for next year.

Rather than re-tread old necrotic ground, Rebel Inc: Escalation is a different sort of asymmetric strategic sim, tackling the thorny problem of dealing with insurgencies in post-invasion warzones through diplomacy and military force. Inspired by the conflicts still raging in Afghanistan, it's a morally messy, complex situation at the best of times, so I'm interested to see how well the game tackles its thorny subject matter.

Rather than being a straight port of the mobile version, Rebel Inc: Escalation is bringing some new features to the table, as well as much prettier 3D graphics. The studio claims that the initial early access release will be a complete game with multiple regions to fight over and multiple governors to play as, but a lot more planned.

By the time the game leaves Early Access some time in 2020, they want to add more regions, more governors, and a persistent large-scale campaign mode to string everything together. There's also multiplayer coming, in both co-op and competitive forms. There's also plans for full Steam Workshop-enabled modding support, letting players create and share new scenarios, which is always nice to see.

While Ndemic Creations isn't ready to pin down an exact launch day, the studio says Rebel Inc will make its PC debut on Steam Early Access this October will for $15, with plans to increase the price as they add more content.