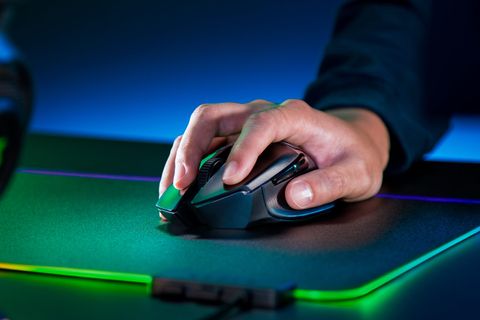 The Razer Basilisk X Hyperspeed lacks customisation, but it's a lightning-quick mouse that sits comfortably in your hand, even during extended sessions.

Razer claims the technology is 25 percent faster than any other wireless tech. In practice, as I said in my Viper Ultimate Review, that translates to ultra-speedy performance and near-zero latency. No matter what I threw at the Basilisk X Hyperspeed, from shooters to strategy sims, it felt lightning quick, and I never detected delays between my clicks and what happened on screen. But does its reduced price come with important compromises?

The sensor on the mouse's base shows no signs of corner-cutting: its specs match those in the more expensive Razer Deathadder Elite, arguably the best gaming mouse on the market. You can ramp it up to 16,000 dots per inch (DPI)—the same as the pricier Logitech G502 Lightspeed, our favourite wireless gaming mouse—and Razer claims 99.4 percent sensor accuracy. That's not quite as good as the Viper Ultimate (20,000 DPI, 99.6% accuracy), but it's still impressive, and it can track up to 450 inches per second: for comparison, the G502 Lightspeed is only rated up to 400. In-game, I never noticed any hitches.

As well as connecting to your PC via a dongle, you can also hook it up via Bluetooth. That means you can connect to almost any desktop or laptop easily, and it worked quickly across every PC I tried. I'm not convinced the Bluetooth support is vital, because you can remove a section of the mouse's body to slide in the dongle, which makes it easy to transport. Plus, Bluetooth performance won't match the standard wireless connection. But I appreciate the flexibility.

I can't complain about the battery life, either. On just a single AA battery, Razer claims it will last 285 hours. Even if you use it eight hours a day, that means it will last well over a month. I didn't have long enough to verify that, but during a week I barely made a dent in it, according to the battery indicator in Razer's Synapse software. To save extra juice, you can change how quickly it falls asleep when left idle, and it always woke up as soon as I moved it.

Top marks for tech, then, and the Basilisk X Hyperspeed doesn't look too shabby either. The deep, swooping thumb rest and the pointy ends of the left and right click are a tad extravagant, but I like its mean, sharp angles, and the plain black finish—with the occasional streak of gloss—stops it becoming obnoxious.

It feels comfortable in the hand. The grippy thumb rest never rubbed during long sessions, and the coating on the rest of the mouse stops it slipping in your palm. My outer two fingers rested naturally on the outside bulge of the mouse, itself covered with the same surface as the thumb rest, which meant I never had to think about where my hand was sitting (a problem I had with the symmetrical, ambidextrous Viper Ultimate).

The scroll wheel is tuned perfectly: it's never stiff, but you can still feel the individual clicks as you turn it, so you always know if you've applied enough pressure. The mouse buttons—two primary, plus two programmable on the side—feel reassuringly sturdy when you press them. One of my few gripes with the Viper Ultimate was that the buttons felt thin and flimsy: these buttons are thicker, and they even sound less tinny.

However, they do tend to move laterally at the slightest sideways pressure. By prodding them gently you can really make them tilt, which makes me question how long they'll last. Also, whenever I picked the mouse up and moved it around, the scroll wheel area rattled. It wasn't loose at all (unlike the mouse buttons, I couldn't wiggle it side-to-side), so I couldn't tell what was making the noise, but it made the mouse feel a bit cheap.

The lack of customisation might put some people off, too. It only has two programmable side buttons, which is less than, say, the Logitech G604 Lightspeed, another wireless mouse in the same price bracket. Personally, I don't ever use more than two extra mouse buttons, but it'll be a dealbreaker for some.

The mouse also lacks RGB lighting: With a lot of Razer's mice you can choose the colour and effect of the light-up Razer logo, but there's no light to speak of here. You can switch the DPI between five custom levels by hitting a button near the scroll wheel, but there's no colour indicator to let you know your current setting. Instead, you have to rely on Razer's Synapse tech, which pops up every time you switch sensitivity. If you're not running Synapse on your PC, you'll just have to guess.

And despite how pleased I am with the wireless tech, it once lost connectivity altogether. It only took me 10 seconds or so to reconnect—I turned the mouse off and on, then removed and inserted the dongle, and all was fine—but at the wrong moment it would've been really frustrating. Still, it only happened once in a week, so I wouldn't think it's a systemic problem.

On balance, none of these shortcomings stop me recommending the Razer Basilisk X Hyperspeed. It's impressive where it matters most: performance, comfort, and battery life. The build quality in some areas feels less than premium, and it's a shame you can't customize it as much as other mice, but you won't find wireless tech and a sensor this snappy for less than $60 anywhere else.

The Razer Basilisk X Hyperspeed lacks customisation, but it's a lightning-quick mouse that sits comfortably in your hand, even during extended sessions.