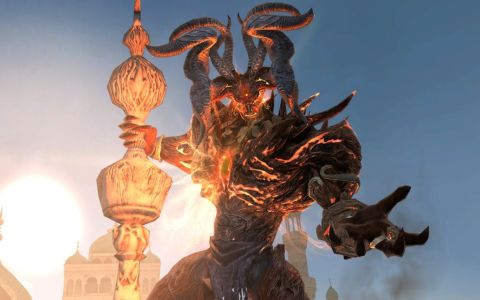 A disconcerting sense of déjà vu blankets The Forgotten Sands. It's not that this latest Prince of Persia evokes the marketing surge for Disney's just-released Prince of Persia movie – Ubisoft would be quick to point out that this is not a movie tie-in. And it can't be that the game is too similar to the Prince's last outing, because this is actually a return to the earlier The Sands of Time trilogy, taking place between The Sands of Time and Warrior Within.

No, Forgotten Sands feels familiar because it relies so heavily on timetested platforming mechanics. Once I learned to scale walls, climb pillars and swing on poles, there's not much else to do. Every level and puzzle is designed to make use of a mix of those core skills, so that by the end of the game, I stopped seeing environments and only saw linear obstacle courses.

In that regard, The Forgotten Sands is less of an immersive narrative experience and more of a technical exercise. And, fortunately, that's exactly what I'm looking for in a platformer. Halfway through the game, I'd already forgotten about the story – the Prince and his brother fighting to banish an undead army they accidentally unleashed – and was focused on how each new room I entered would challenge my ability to time leaps between pillars with architecturally unsound hanging axes that swung in my path.

While the platform puzzles are never difficult to the point of frustration, the way each successive room requires you to leverage acrobatic feats in increasingly challenging scenarios is reminiscent of Portal's level progression. The first part of the game trains you to recognise visual cues – protruding stones are meant for climbing, while hanging banners are used to safely descend to the ground, for example – so that you spend less time thinking about how to get from point A to point B and more time executing the perfect timing necessary to actually complete the stage.

For instance, after I acquired the special power to temporarily turn water fountains into solid beams, a puzzle required activating that ability to swing across a chasm, deactivating it mid-jump to splash through a wall of water, and then reactivating it again just in the nick of time to grab on to another frozen water stream.

This kind of precise platforming is very satisfying in the later stages, where the massive and complex level puzzles give you little room for hesitation (even though you can always rewind time if you make a mistake). It's also why playing with a gamepad is recommended – I had problems keeping track of what buttons to hold and which to let go of on a keyboard during the more complex sequences.

When I wasn't vaulting over spiked pits or scaling the gears of a colossal astrolabe, I was on the ground, swiping my sword at hordes of zombie soldiers. The fighting is reduced to furious button-mashing – there are no blocks or parries here. A power skill tree enabled me to unlock four combat abilities, but the only one I found useful was a stone shielding that grants brief invulnerability – which was very useful for defeating mini-bosses. What the game lacks in refined combat, it makes up for in numbers. Fighting up to 50 enemies at once is a sight to behold, even if I never felt overwhelmed because of how easy the grunts are to kill.

The Forgotten Sands requires that the Prince takes many risks, while the game itself plays it relatively safe. That's why, despite its solid platforming, it's ultimately a forgettable experience.

Prince of Persia: The Forgotten Sands