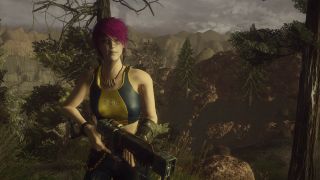 The team behind Fallout: New Vegas mod Project Brazil—a massive fan add-on
that adds a new vault, map, quests, and thousands of lines of dialogue from around twenty voice actors—released the first of its three parts back in 2013, and it sounds like we won't have too much longer to wait for Part 2. An update to the game's Moddb page reveals where the project is at now, while a (spoiler-filled) five-part video series shows off some alpha footage of that upcoming second chapter, along with the improved assets that will be making their way to Part 1. Here's the first video (I'll stick three more at the bottom of this post—the fifth and final video is set to go live some time today).

"Part 2 incorporates a remastered Vault 18 [the new vault created for the mod] with all new level designs and new voices for several characters," the update post explains. "It also spans 2 major branching quests in the Wasteland, the NCR and Raider Alliance, each with 5 main quests and thousands of lines of dialogue in many deep quests with profound changes to the way the plot plays out. Even small choices play a big role, ensuring each character type and decision spawns a new way of seeing the story unfold, often spawning whole new plots with unique endings."

"We start with a recap of events in Part 1," the video description elaborates, "while showing off the fully renovated Vault 18's new level assets before giving you a look at the first hour of gameplay in one of the many branches the story can take. Because your playthrough has multiple narrative arcs, your story may go a little different than this one. You can play with all the companions, just a couple, or none at all. Be known as a Warrior or a Scientist, Join the Enclave or Defend the Vault, Join the NCR or Raider Alliance, help the New Reno Mob or the Shi Rebels conquer the Pass—each with multiple paths to completion and a unique ending."

It's been a four-year wait for Part 2, but it seems like a release is on the way fairly soon. Project Leader Brandan Lee states that "we'll release a final Release Date Reveal Trailer in a few months".